SINGAPORE - Why do many parents continue to feed their children pricey formula milk after they turn one, even though fresh milk and a balanced diet is adequate for their nutritional needs?

The Straits Times spoke to 25 parents who have children above the age of one who are still giving their children formula.

A few said they did not know that formula milk was unnecessary after one, while most chose to continue with milk powder because their children preferred the taste of it or could not tolerate fresh milk.

"No one told me about it. In fact, other parents encouraged me to keep feeding them formula milk, saying that it is good for brain development," said Mr Jason Teo, 35, a purchaser in the marine industry.

Since his daughters, aged four and one, like the taste of formula milk, Mr Teo is reluctant to switch to fresh milk.

Mr Kwan Yu Heng, 29, a postgraduate student, said he was unaware too.

"I've been following the recommended ages on the milk tin labels," he said.

But most parents, including Mr Bang Yong Lo, 36, a ship broker, say they stick to formula because their children are used to it.

"He needs to drink a lot each day, and when I just gave him just fresh milk, his body couldn't take it and he had a bit of diarrhoea," said Mr Bang of his two-year-old son.

Mrs Carolyn Phua, 36, a corporate relations executive who has two young children, said they have become accustomed to having formula milk in their diet.

"My son does not like the taste and texture of fresh milk, so we stuck to formula milk," added Ms Divine Barrinueveo, 35, whose son is turning four this year. 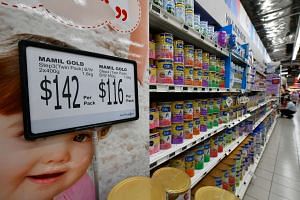 'Milk is milk, however fancy the marketing', says Josephine Teo

Senior Minister of State for Trade and Industry Koh Poh Koon said in Parliament on May 8 that children above 12 months old do not require formula, as cow's milk together with a balanced diet has enough nutrients. He was announcing steps that the Government was taking to make milk powder more affordable.

Dr Dharshini Gopalakrishnakone, from the obstetrics and gynaecology centre at Mount Elizabeth Novena Specialist Centre, explained that untreated cow's milk is not recommended before the age of 12 months as the infant intestine is not properly equipped to digest non-human milk. So infant formula was created to help feed babies that could not be breast fed.

While there is no recommended duration for a baby's intake of formula milk, Dr Yang Linqi, a paediatrician at Thomson Paediatric Centre, said they can start taking cow's milk by the age of one as they would be eating solid food well by then. She added, though, that it is not harmful for a child older than one to drink formula milk.

Associate Professor Marion Aw, from the division of paediatric gastroenterology, nutrition and hepatology at the National University Hospital, said milk in general is a good source of nutrition for young children beyond a year old as it is a good source of macro and micronutrients, such as calcium and vitamin D.

"However, if young children do not like to drink milk, they can get this nutrition from other sources, such as dairy products."