SINGAPORE - White-collar workers in the air transport sector who are affected by economic restructuring can seek to upgrade their skills under a new scheme.

In addition, more mid-career professionals considering a switch to the sector can benefit from an expansion of an existing reskilling programme.

These two measures were announced by Manpower Minister Josephine Teo at the Sats Inflight Catering Centre 2 on Monday (July 22), amid efforts to transform the air transport sector and maintain Singapore's position as a global aviation hub.

Mrs Teo said despite recent news that some sectors such as manufacturing are weakening, air transport is one sector that enjoys good growth momentum.

"What we want to do is not to let go of the good growth momentum," she said.

As companies in the sector transform to take advantage of opportunities, some jobs will become obsolete while the companies would need new manpower in other areas, said Mrs Teo, who is also Second Minister for Home Affairs.

This is where the new Redeployment Professional Conversion Programme (PCP) for Air Transport Professionals will come in.

"It is a win for the company because it means that their manpower needs can be met in a more timely manner," she said. 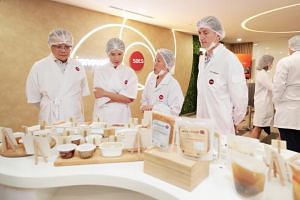 About 60,000 job vacancies waiting to be filled, with about half for PMETs: Josephine Teo

"It is also a win for the individual because it means that they get to keep a job... They acquire new skills and in doing so, they also get to extend their career runways. They have more career mobility."

The new Redeployment PCP for Air Transport Professionals will help companies looking to reskill or redeploy their workers by subsidising the workers' salaries for up to six months, during the period that the workers are undergoing retraining.

Companies will plan the workers' training programme, which can include both classroom training and on-the-job training, and submit their plans to programme administrator Republic Polytechnic for review.

If the companies meet the necessary requirements and their plans are approved, they can receive salary support of up to 90 per cent of the employee's monthly salary, capped at $6,000 a month. This will be for a period of up to six months.

This is expected to benefit 100 PMETs (professionals, managers, executives and technicians) in the air transport sector in the next two years.

Meanwhile, an existing similar programme to help mid-career professionals move into the air transport sector will have its capacity increased from 100 to 200.

The PCP for Air Transport Professionals, which has helped 100 people since it was launched in February last year, will help expand the pool of job seekers in the industry, said WSG.

Two employees at airport and food services provider Sats vouched for the PCPs, saying that these helped them settle into their new jobs.

After having been an administrative assistant for more than two decades, she was redeployed after Sats digitised the work process.

While she was initially apprehensive about the job change, which required her to learn, for instance, how to handle a specialised mobile device, Ms Hamidah said the PCP helped allay her concerns and prepared her for the new job.

Mr Tan Chun Min, 25, was a graphic designer before switching jobs to become a 3D modeller who designs simulations to optimise work processes at the Sats kitchen. He went through the PCP for Air Transport Professionals.

Said Mr Tan: "I think the PCP is quite important as it allows us to work on our skills and upgrade ourselves.

"Whichever industry we are from, we can actually come in... and pick it up from there as it is something like on-the-job training."

Monday's announcements are the latest in a slew of initiatives aimed at achieving the goals set out in the Air Transport Industry Transformation Map announced in 2017.

The plan sets a target of increasing productivity by about 40 per cent by 2025 while redesigning or creating 8,000 "good jobs", with more positions for professionals, technicians and cabin crew.

There are more than 100 PCPs in over 30 sectors. The programmes helped close to 5,000 people reskill and take on new careers last year, an increase of more than 30 per cent from 2017.

Sats said on Monday that it is expecting to support a total of 100 PMETs through the two air transport PCPs for new hires and redeployment.

Said Sats president and chief executive officer Alex Hungate: "We are finding that the rate we want to retrain and redeploy people is accelerating, just as the change in the environment is accelerating.

"So this additional support helps us to accelerate the pace at which we can re-equip people for new exciting jobs in these new businesses."

The company is also currently tapping WSG's Capability Transfer Programme to train a team of 80 local workers to use the latest technologies in preparing food products.

The programme, announced by WSG in late 2017, seeks to help companies plug capability gaps by transferring new capabilities in growth areas globally to the local workforce.