Virtual reality (VR) headsets are not all fun and games. A $2.2 million construction safety school launched yesterday plans to get construction workers here to don the devices, allowing them to experience the dangers of working at heights.

In one scenario, they get to learn that unless they rectify unsafe practices such as a lack of guard rails at a work site, they may receive the shock of seeing a virtual co-worker fall off a building.

This is to drive home the importance of staying vigilant at work sites, a timely exercise as figures show that the workplace fatal injury rate for the construction sector rose to 3.1 for every 100,000 employed persons last year, with 14 fatalities - two more than in 2017.

As of May 15 this year, there had already been nine workplace fatalities across industries, with six from construction.

At the launch event, Minister of State for Manpower and National Development Zaqy Mohamad noted that with construction demand expected to remain strong this year, more new and inexperienced workers will arrive in Singapore.

"With companies providing varying standards of workplace safety and health training, teaching workers, especially new ones, to understand and prepare for (hazards) can be challenging," he said.

Technology is key in safety training, he noted, as it can bridge language and cultural gaps for workers who speak different languages and are of different nationalities. 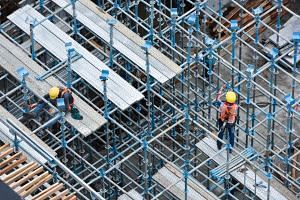 Plans to get tough with firms to boost workplace safety

The realistic virtual experiences at the construction safety school, ranging from being crushed by machinery to falling into an opening, can ensure workers "think twice before cutting corners", he added.

From next month, workers, including supervisors, on all new projects by developer JTC will attend courses at the six-floor school spanning 1,200 sq m. They will receive training in areas such as accident prevention and situational awareness.

The current 10,000 workers on 50 existing JTC projects here will also receive such training on a case-by-case basis.

Besides JTC, at least five other contractors have expressed interest in using the school, which can train up to 15,000 employees a year.

Reflecting on the number of fatalities at construction sites, SCAL president Kenneth Loo said: "This clearly shows that we continually need to remain vigilant and can never take safety for granted."