Retrenchments rose in the first quarter of the year as the manufacturing sector shed staff, after likely being hit by the escalating trade war between the United States and China.

Job vacancies also dropped for the first time in two years, leading economists to believe this marks a turn in the employment cycle, with the labour market turning soft. Jobs may be harder to find and hold on to in the months ahead.

The number of retrenched workers stood at 3,230, up from 2,510 in the previous quarter. The rise hit mainly production and related workers from electronics, the Ministry of Manpower (MOM) said in its latest labour market report yesterday.

Retrenchments in electronics made up 18 per cent of the figure, followed by service industries such as wholesale trade.

While restructuring and reorganisation remained the main reasons cited, there was a rise in the share of retrenchments due to high costs and the downturn in the industry.

Professionals, managers, executives and technicians (PMETs) continued to make up most of the retrenched residents, at 69 per cent.

After seven quarters of increases, demand for labour has eased too, with fewer seasonally adjusted job vacancies in March at 57,100, down from 62,300 last December. 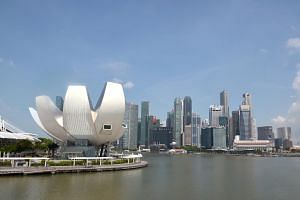 Bulk of retrenched residents in Q1 are PMETs

DBS senior economist Irvin Seah said that the simultaneous uptick in retrenchments and decline in job vacancies confirm that the labour market has turned soft in the first quarter. "This is a lag effect of the slowdown in growth, particularly in the fourth quarter of last year," he said, noting that growth figures for the fourth quarter saw a drastic downward revision this year.

Weighing on growth is the global electronics slowdown, hitting the manufacturing sector, with the trade war "adding salt to the wound".

But employment dipped in manufacturing for the second consecutive quarter, led by cutbacks in electronics, which posted its largest employment contraction in six years.

Maybank Kim Eng economist Chua Hak Bin said he expects firms to be more cautious in hiring for this year. "Employment growth will likely slow, while manufacturing employment will likely remain in contraction for the rest of the year," he said, citing the US tariff hike last month and its toll on supply chains.

This is in line with findings of a survey of professional forecasters, who now expect the manufacturing sector to contract by 0.2 per cent this year, a far cry from their earlier prediction of 2 per cent growth.

Mr Erman Tan, chief executive of Asia Polyurethane Manufacturing, has seen a 20 per cent drop in sales, in part due to a domino effect from the trade war, with Chinese customers holding back on purchases.

He added that his company is now not hiring in manufacturing.

Apart from external factors, Dr Chua added that stricter dependency ratio ceilings - the proportion of foreign workers a firm can employ - for services from next year may dampen labour demand in some segments, such as retail trade and hospitality.

Services were the main driver of total employment growth in the first quarter, and construction posted its first employment gain in three years, said MOM.

The seasonally adjusted resident long-term unemployment rate, or share of residents in the labour force jobless for at least 25 weeks, dipped from 0.8 per cent last December to 0.7 per cent in March.

Meanwhile, the citizen unemployment rate continued to edge up, from 3.1 per cent last December to 3.2 per cent in March.