Changes are afoot to enable Singaporeans to work longer and save enough for old age. A Straits Times round-table, in partnership with the Ministry of Manpower, National Trades Union Congress and Singapore National Employers Federation, looks at the issue.

Working Singaporeans are familiar with upgrading and reskilling to take on new roles, and new jobs.

Singapore companies are restructuring to take advantage of technology and new opportunities.

And as more Singaporeans live longer and are able to work well into their late 60s, and beyond, it is also time for workplaces to undergo transformation, said panellists at a round-table discussion last Friday.

The round-table discussion was organised by The Straits Times, in partnership with the Ministry of Manpower, the National Trades Union Congress (NTUC) and SNEF. 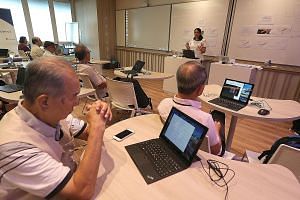 Create flexible workplaces with synergy for all ages

Measures in right direction, but some want them sooner

Mrs Teo, Mr Ng and Dr Yap are advisers to the Tripartite Workgroup on Older Workers, which this month made recommendations to refresh the retirement and re-employment framework, strengthen older workers' retirement adequacy, and promote an inclusive workforce and progressive workplaces that value older workers.

At the National Day Rally on Aug 18, Prime Minister Lee Hsien Loong said the Government had accepted the recommendations in full.

CPF contribution rates will also be raised over the next 10 years or so for workers aged 55 to 70.

During the discussion at the National Press Centre on Hill Street, the panellists also touched on the mindset shifts needed for the workplace of the future.

SNEF's Dr Yap said that by 2030, he hopes to see a Singapore that has already transformed, where employers have adapted to accommodating older workers in multi-generational workplaces.

Giving his vision of a progressive workforce, he said: "We accept all these older workers, in fact, we embrace them. We have Merdeka Generation workers, Gen X, Gen Y, Gen Z, all working in harmony in that kind of environment. That can be a competitive advantage in itself.

"You have that kind of experience that the much older workers can give, the younger ones that give the creativity, that energy, the main ones come up with systems and processes. I think it's a very nice formula," he said.

Prof Chia, who has studied the issue of retirement adequacy, added that 2030 is the year when Singapore will be considered to be a "super-aged" society, which means that 20 per cent of the population will be 65 years old and above.

"I want to see older workers in more broad-based jobs. I'd like to see when I walk out to a pharmacy, there is an older worker. That is the 2030 I hope to see, where we have more enlightened employers, people go for retraining, and workers can adapt," she added.

Mrs Teo said that for this vision to be realised, employers have to be open to giving staff flexible work options.

Many older workers not ready to retire, says unionist

"In order for the employment rate to realistically go up, it also has to involve more flexible work options... that benefit the employers in terms of how you deploy but, at the same time, allow people having reached that age to work at reduced intensity. It has to be win-win.

"How do we get there? I think there's still a lot of work to be done," she said.

Mr Ng, who is NTUC secretary-general, said both employers and workers must play their part.

Employers have to be enlightened and look past an individual's age, he said. As for workers, his advice is: "Believe that you can do it. Take the first step to make whatever you want a reality today."

It is a message that bears repeating for the Government, employers and the labour movement as well, he added. "Let's get our hands dirty, let's go do it."