Info on MOM's online directory of such firms; customers have been rating them on a scale of 1-5

Would-be employers of domestic helpers can now check on the effectiveness of a maid agency, following a new rating system based on scores given to an agency by its customers.

The information can be found on the Ministry of Manpower's (MOM) existing online directory of maid agencies, each of which can get star ratings of one to five, with five being the top score.

The rating system, announced in March, is part of an ongoing effort to raise industry standards. The ministry said the results will inform agencies of the specific areas they need to improve on.

The directory has about 1,455 agencies but only around 580 have received ratings since the ministry began surveying employers in June.

One reason is that ratings are published only when at least three reviews are received.

Also, employers are asked to rate the agency only three months after they have hired a domestic helper.

There were about 20,000 of them and they were asked via SMS. So far, about 10,000 have responded, a ministry spokesman told The Straits Times. 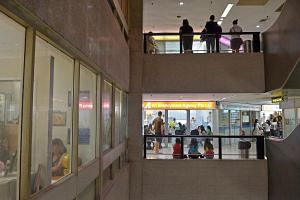 Let maids have a say too

They are asked to rate agencies on four service areas - including how well the agent explained the application process, fees, service contract and maid's contract, as well as how able the agent was at finding a suitable maid.

The 20 biggest agencies - according to the number of maids placed in the past year - all scored below 4.

The new effort was welcomed by the Association of Employment Agencies (Singapore) (AEAS) and maid employers such as Mrs Geraldine Ang, 52, deputy director for service management at a statutory board.

Said Mrs Ang: "It's a useful guide. I'd liken it to going to TripAdvisor to check on hotels."

But other factors are important too, such as how long domestic helpers stay with employers after being placed, as well as the years of experience of an agency, she added.

AEAS president K. Jayaprema said the ratings should spur the firms to do better and could be "a wake-up call" for some.

But they also add to the existing data that would-be employers have to sift through on the directory, such as retention rates, transfer rates and demerit points, she said.

"Is it going to be confusing?'' Ms Jayaprema asked. She also suggested surveying an employer immediately after a helper is hired instead of three months later, so that his views of service standards are not influenced by how well he gets along with the maid.

Niraz's director M.L. Philomena is not overly worried about her 1.7 score, saying she has her regular customers.

"There are always some good and some bad employers. If I give in to an employer on everything she wants, I'm not being fair to the domestic helper," she added.

Mr Rengasamy Balasubramanian, owner of Bala's Employment Agency, agrees. Still, he plans to improve his agency's service to get a score beyond 2. "We will do more in explaining the contract and maid's background as well as try to help maids and employers to understand each other better," he said.