SINGAPORE - Almost 30 per cent of workplace injuries here over the past four years have been the result of slips, trips and falls (STF), with more than 3,000 employees affected annually during that period.

These statistics were revealed by Minister of State for Manpower and National Development Zaqy Mohamad at the Workplace Safety and Health (WSH) Forum on Kitchen Safety on Monday (Aug 26).

The forum was held at the Regent Singapore hotel and organised by the Singapore Hotel Association (SHA) in conjunction with its year-long Slips, Trips and Falls campaign to raise awareness of such workplace accidents.

Calling the increase in STF-related injuries "worrying", Mr Zaqy said almost half of such injuries in the hospitality and entertainment industry had occurred in the kitchen.

Those most susceptible to such injuries were staff working in the kitchens of hotels and food and beverage outlets, with 80 per cent of such incidents occurring during peak periods due to lapses in safety when trying to get work done quickly.

Mr Zaqy said that in one such incident in January this year, a worker slipped in a kitchen and accidentally grabbed a pot of scalding hot oil as she fell.

She suffered 80 per cent burns on her body as a result and eventually died of her injuries. 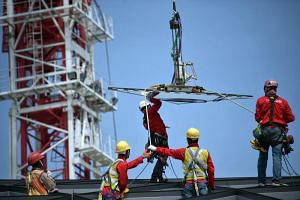 Mr Zaqy said that in response to the increase in STF, the Ministry of Manpower (MOM) mounted an enforcement operation in June and July this year, which saw around 500 inspections conducted in various sectors where such incidents are common, including the construction, manufacturing, accommodation, food services, transport and storage, and wholesale trade sectors.

This resulted in 876 enforcement actions being taken against 439 companies, including four stop-work orders and 144 composition fines amounting to $164,000.

The top safety contraventions discovered during the operation included poor housekeeping that could lead to tripping hazards, wet, slippery or damaged floors, and the failure to implement control measures to prevent STF.

Mr Zaqy said the SHA would be working closely with the WSH Council to conduct a safety week, where briefings emphasising workplace safety will be carried out, and share best practices with its members working in kitchens.

He named three such practices, which could help prevent STF-related injuries.

First, companies should maintain good housekeeping in the kitchens, which includes ensuring that the floors are clean and dry, pathways are cleared of unnecessary items for the ease of movement, and products are properly stored and labelled to facilitate quick retrieval.

Second, employers should implement control measures to mitigate risks of STF. He cited Regent Singapore as an example of this, as the hotel had installed anti-slip flooring and mats within the kitchen areas, and put up signs to warn workers about hazards such as wet and slippery floors.

Finally, employees should take ownership of their personal and co-workers' safety. Mr Zaqy said Mandarin Oriental hotel had launched a campaign which encouraged workers to look out for each other's safety, reducing the number of STF significantly.

Aside from adopting such best practices, companies can also tap resources and guidelines provided by the WSH Council to raise awareness about kitchen safety among workers.

Regent Singapore’s executive chief steward and hygiene manager Derek Wong, who worked in the hotel for around 20 years, said the WSH Council’s workplace safety programme had helped reduce the number of accidents that occur.

He said: “In the past, there was no guidance to assess hazards in the kitchen. People would only respond after an accident happened. The programme is a really good preventative measure.”

Mr Zaqy said the council's Hospitality and Entertainment Industries Committee has collaborated with social media companies SGAG and Mothership to produce educational videos and an article on the types of injuries and hazards faced by kitchen staff.

In addition, the committee will work with different associations and industry partners to come up with plans to improve kitchen safety over the next few years.

He said: "Kitchen safety is often overlooked. Accidents can happen in a split second when one is not careful or when one takes a shortcut... Let's all work together to provide safe and healthy workplaces for our workers."

SHA's president, Ms Kwee Wei-Lin, said in her speech: "Today's forum is an excellent start for the industry to come together to learn and further raise the bar on total WSH in our kitchens."