Tripartite partners issue guidelines to benefit cleaners and security officers, among others

Workplaces are poised to become more comfortable for thousands of outsourced workers such as cleaners and security officers if an advisory by tripartite partners is widely adopted by companies.

These workers should all have access to proper rest areas with spaces to keep their belongings safe and drinking water, according to the advisory.

The guidelines were developed by the Ministry of Manpower (MOM), the National Trades Union Congress (NTUC) and the Singapore National Employers Federation.

They were made public by Minister of State for Manpower Zaqy Mohamad yesterday and set out good practices that various companies can follow.

On a visit to Ikea Alexandra, which provides rest areas for its outsourced workers, Mr Zaqy advised companies to treat such workers as extended family, which would motivate them to do a good job.

There are about 77,000 resident workers in the cleaning, security and landscaping sectors.

The advisory, which is part of the Workcare initiative that Mr Zaqy launched in April, now recommends that they be given access to comfortable rest areas that also offer them a measure of privacy. The areas should have proper ventilation and lighting, with facilities such as lockers and drinking water.

More than 600 stakeholders, including property owners, service providers and workers, were consulted, and the MOM visited over 200 work premises such as foodcourts and shopping malls before the advisory was set out.

Mr Zaqy noted that 70 per cent of these work premises had rest areas for their outsourced workers, but some of the areas were not up to the mark in terms of quality. 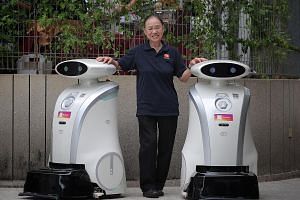 Cleaners to pass broom to residents on CleanSG Day

The MOM added in a statement that some of these rest areas were unhygienic, had poor ventilation or lacked shelter.

"Minimally, rest areas should provide access to drinking water, proper seating areas for workers to rest and not be in the prying eyes of the public," said Mr Zaqy.

Given the maturity of Singapore's economy and society, he said, more could be done for the well-being of outsourced workers. But he wanted the initiative to look after these workers to come from companies themselves.

"We want employers to come on board because they care for workers, not because the Government regulates it. Most employers are willing, but the issue is practicality."

Mr Zaqy said some companies have space constraints or cost concerns, "but we are really just asking for a safekeeping area, seats and cool water".

He pointed to how Ikea Alexandra converted two parking spaces to make room for the rest area.

Mr Zainal Sapari, assistant secretary-general of NTUC, noted that older commercial buildings or properties such as condominiums might have difficulty finding rest areas for workers.

He said that even if building owners could not allocate a space for proper rest areas, they could look at sharing the facilities set aside for their employees with the outsourced workers. This would make for a more productive workforce, he pointed out.

Mr Zaqy said: "It is easier to always mandate things, but that does not create a culture. It is beyond putting a rest area in place, but about work culture and the perception that these workers are also part of the family."