SINGAPORE - More people were working in Singapore last year, but Singaporean workers saw their incomes rising at a slower pace than in the previous year.

The labour market improved overall, with retrenchments at a six-year low and a lower annual average unemployment rate compared with the year before, according to the latest estimates released by the Manpower Ministry (MOM) on Thursday (Jan 31).

This is despite economic growth easing slightly from 2017. Preliminary estimates put growth at 3.3 per cent last year, down from 3.6 per cent in 2017.

MOM data shows that the typical Singaporean in full-time work earned more last year, with median income rising 3.3 per cent year on year to $4,183 as of June.

These income figures include employer contributions to the Central Provident Fund.

DBS economist Irvin Seah said the slower income growth is consistent with the slower pace of economic expansion, and both are expected to be lower this year as well.

MOM notes in its report that year-on-year income changes are prone to fluctuations because data is captured from a sample survey.

Lower-income Singaporeans are narrowing the wage gap, as real income at the 20th percentile grew at a faster pace – an average of 4.3 per cent per year – over that period. 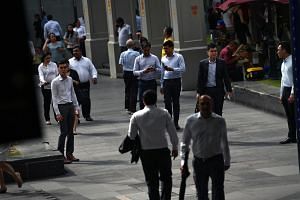 In terms of employment, the workforce grew by 39,300 in 2018, excluding foreign domestic workers. Of these additional workers, 28,400 were Singaporeans or permanent residents, while 10,900 were foreigners.

This is a turnaround from 2017, when the number of foreigners – excluding maids – working in Singapore fell by 32,000. It was the biggest drop in 15 years and caused a rare drop in total employment.

The ministry said the increase last year was driven by the services sector, while the number of workers in construction and manufacturing fell for the third and fifth consecutive year respectively.

More residents were employed last year in service industries such as community, social and personal services; transportation and storage; financial and insurance services; information and communications; and professional services.

The annual average unemployment rate fell to 2.1 per cent last year, from 2.2 per cent in 2017. The rates were 3 per cent for Singaporeans and 2.9 per cent for residents, down from 3.3 per cent and 3.1 per cent respectively.

However, the MOM noted in a statement that labour market trends from September to December last year were mixed, with a slight uptick in unemployment rates compared with the third quarter of 2018.

It expects local workforce growth to remain modest going forward, due to the underlying demographics of an ageing population and low birth rates.

"As economic growth moderates, workers and businesses need to remain agile and responsive to economic restructuring and the evolving employment landscape," it said.

National Trades Union Congress assistant secretary-general Patrick Tay, a labour MP, said that with the general sense of uncertainty this year amid trade tensions between the United States and China, Brexit, and technological advances, the labour market figures for the first half of the year should be closely watched.

“I expect to see more companies doing more restrategisation, reorganisation and mergers and acquisitions, which may result in retrenchments,” he said.

He added that he hopes to see a focus in Budget 2019 on more support for workers and companies to do training and upgrading.

He also hopes to see more emphasis on professionals, managers and executives, who are more affected by retrenchments, and on older workers, as the workforce ages.