More foreign workers arrived here not knowing what their terms of employment including their salary are, a situation that makes them more vulnerable to exploitation.

A survey last year commissioned by the Ministry of Manpower (MOM) found that 15.4 per cent of non-Malaysian work permit holders said they did not receive their in-principle approval (IPA) letter before arriving in Singapore.

This is up from 4 per cent in 2014, the last time a similar survey was conducted.

Under the law, employers are required to mail the IPA letter to the worker after his work permit application is approved, before he leaves for Singapore. The letter contains the terms and conditions of his employment, including the basic salary.

It serves as a de-facto contract, in the absence of any other written agreement. Employers who omit this step may be fined up to $10,000.

On why there has been a jump in recalcitrant employers on this matter, Migrant Workers' Centre (MWC) chairman Yeo Guat Kwang said some may not be aware of the rule.

"We need to continue to urge employers to provide the IPA to their workers," said Mr Yeo, speaking on the sidelines of NTUC's May Day Migrant Workers Celebration. During the event, MWC announced the operation of its first recreation club at 51 Soon Lee Road.

He urged foreign workers who encounter issues with their IPA letters, particularly salary disputes, to report their problems early.

Employers are required to mail the IPA letter to the worker after his work permit application is approved, before he leaves for Singapore. The letter contains the terms and conditions of his employment, including the basic salary.

However, Transient Workers Count Too general manager Ethan Guo said that during salary disputes, employers often hold the upper hand as work permits are "directly tied" to them.

He added: "Workers who make a complaint to MOM will face premature termination of their jobs, which will leave them vulnerable and potentially (they may) be sent home before managing to recover debt they incurred in taking loans to work here.

"These days, workers with salary disputes are almost automatically allowed a change of employer. However, the success rate of finding new employment in Singapore is very low."

The survey held some good news though. Nearly half of respondents who did get an IPA letter said it was in their native language, an increase from 21.3 per cent in 2014. 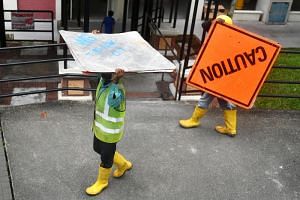 The majority, nearly 93 per cent, also received the salary stated in the letter. Just 2.5 per cent got a lower sum, while 4.8 per cent received more than what was stated.

Last October, the ministry introduced a Settling-In Programme (SIP). During the event yesterday, Minister of State for Manpower Zaqy Mohamad said checks found that 97 per cent of foreign workers had their letters by the time they attended the SIP between February and April this year.

Those who did not were given a copy by the Migrant Workers' Centre, he added.

"Employers of the small minority of foreign workers who said that they had not received their IPA were subject to investigations," said Mr Zaqy.

"As the SIP will be extended progressively to three other sectors by the end of this year, it will be an effective touch-point for MOM to check if employers are complying with the requirement. We will continue with our efforts to ensure that all foreign workers receive their IPA before they come to Singapore."

The MOM survey, which was conducted by market research company Blackbox Research, also found that foreign workers in Singapore are generally satisfied with their working conditions and would recommend the country as a place to work to their friends and relatives.

Most cited good pay, good living conditions, as well as the safety and security of the country as key reasons.

When asked for their overall assessment, 86.3 per cent of work pass holders and 87.5 per cent of S Pass holders said they were satisfied working in Singapore, similar to figures in 2014.