They are too costly for their previous companies to retain, and supposedly too old for prospective employers to hire.

Such is the double bind that higher-skilled employees and middle-aged workers have found themselves in. They were the hardest hit by layoffs last year, according to recent findings from the Manpower Ministry (MOM).

These groups were also less likely than other resident workers to be in employment within six months of being made redundant. 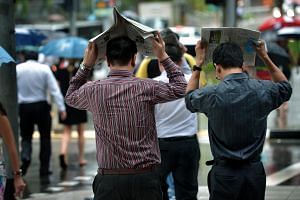 Older workers in their late 40s to 50s were worried about their incomes stagnating too, even as job opportunities waned, based on poll findings released by government feedback unit Reach on Sunday.

Several middle-aged professionals, managers and executives (PMEs) who were recently laid off told The Straits Times that employers are looking for young workers who are cheaper and have more drive, given sluggish economic conditions.

Some firms may say that we are overqualified for the job. We are open to lower salaries, but are companies willing to give us a chance?

Ms Fan Suet Yeng, who has an electrical engineering degree, worked at a multinational corporation for nearly 25 years after graduating from the National University of Singapore. The 48-year-old, who rose to become a senior manager in charge of procurement and logistics earning about $9,000 a month, lost her job a few months ago.

The mother of two school-going children aged 16 and 19 has sent out at least 50 applications for lower-pay jobs in the same field, but has not received a single offer.

"At this age, and with many years of experience, some firms may say that we are overqualified for the job," she said. "We are open to lower salaries, but are companies willing to give us a chance?"

Of the Singaporeans and permanent residents laid off last year, 71.1 per cent were professionals, managers, executives and technicians (PMETs), according to MOM figures released last Tuesday. Nearly two-thirds of resident workers made redundant last year were aged 40 and above.

Some PMETs aged 40 and above said they have heavier financial obligations such as housing mortgages, car loans, elderly parents to support and their children's school fees, and have had to make adjustments to their lifestyles.

Madam Annie Kheng, who is in her late 50s, was an administrative and finance manager in the oil and gas sector for three years. She was left without a job last year when her firm underwent restructuring.

The single mother then took up temporary work, such as an accounting job to cover those who were on maternity leave. She earned under $1,000 a month, while still having to put her two children through university.

"If I really cannot get a job that I want, maybe I should adjust my expectations," she said. "I attended upgrading courses - even in unrelated industries like food and beverage."

In March this year, she secured a managerial position at an IT firm, even though she admits the pay is half of what she used to earn.

Overall, more workers became unemployed last year. In total, 15,580 workers lost their jobs, the highest since the global financial crisis in 2009, which saw 23,430 workers laid off. Job security was the biggest worry among Singaporeans amid the slowing economy, Reach said on Sunday.

Labour experts noted that workers in the vulnerable PMET and older-worker groups may not be able to hold on to jobs as their skills may be outdated and, at the same time, they are more costly to employers.

Mr David Leong, managing director of PeopleWorldwide Consulting, said: "If workers do not upgrade and add more value to their jobs, they will likely work themselves out of their jobs. A younger person... can easily assimilate into his role and, importantly, he will cost less."

Businesses, however, noted that this is not the case in every instance.

Association of Small and Medium Enterprises president Kurt Wee said: "Age may not be a disadvantage. I have seen small and medium-sized enterprises that have hired managers in their 50s. The young may not have sufficient experience when it comes to these roles."

In the past year, there was a sharp rise in the number of PMEs who sought help for employment and employability matters from the labour movement. From last March to February this year, the National Trades Union Congress helped 518 PMEs who were retrenched or had their employment terminated, a more than 50 per cent jump from the previous year.