SINGAPORE - Medical costs and compensation will be paid for in relation to a foreign worker who died and another who was hurt in a crane accident at Novena on Monday (Nov 4), said the Migrant Workers' Centre (MWC) on Tuesday.

The centre said on Facebook that the worksite's main contractor and the two men's employers will be "discharging their responsibilities to both affected workers".

This includes underwriting the costs of medical treatment and other costs related to the workers' care, and ensuring that injury reports and claims are furnished to the manpower authorities.

The worksite's main contractor, Kajima Overseas Asia (Singapore), and the dead worker's employer, LKT Contractors, will also be sending a cash token of bereavement to his family "to help them tide through the difficult period they will face before the work injury compensation is paid out", MWC said.

"MWC will work with the parties concerned to ensure this cash token is received by the intended beneficiaries," it added.

In the accident which took place on Monday morning, a construction crane collapsed at the worksite of an upcoming rehabilitation hub in Novena.

The worker who died was an Indian national, 28, while the injured worker is a 35-year-old man from Bangladesh.

The employer of the Bangladeshi worker is BHCC Construction.

The Ministry of Manpower (MOM) said the jib, or horizontal beam, of the tower crane had failed during a lifting operation. 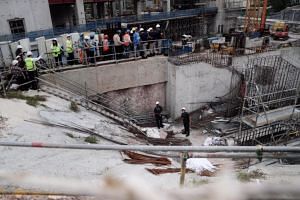 Workplace death, major injury numbers for all companies to be published online

The Singapore Civil Defence Force said the Indian national was pronounced dead at the scene by a paramedic. The injured worker was taken to Tan Tock Seng Hospital.

MWC said that the injured worker had a leg fracture.

Funeral arrangements are being made for the foreign worker who died, and the family of the worker had also asked for his remains to be sent home at the earliest opportunity.

MWC said it would work with his employer to ensure the request is seen to.

The centre also said that counselling would be arranged for other worksite staff should the need arise.

It requested that the affected workers and employers "be accorded the time and space to recover from this unfortunate incident, whether it is to rest and recover, or to discharge the appropriate duties required of them under the law".

The injured worker's employer has also assured MWC that it will continue to employ the worker after he has fully recovered.