Recently, Chief Justice Sundaresh Menon spoke to new lawyers about the challenges ahead, at a time when many of their seniors have called it quits. There is no quick fix to this 'hollowing out' of mid-career lawyers, say those in the legal community.

It is a familiar tale - working past midnight then returning to the office hours later the next morning to plough through case notes and rush to meet deadlines.

Anecdotes like this are common in the legal industry, which has in recent years seen an exodus of mid-tier lawyers, a point raised by Chief Justice Sundaresh Menon last month at this year's Mass Call, a proceeding that formally admits lawyers to the Bar.

Citing statistics which showed mid-tier lawyers - those with seven to 12 years of experience - made up less than 10 per cent of the profession in the last five years, he said that such "burnout" has led to a "hollowing out" of mid-career lawyers.

The number of mid-tier lawyers has gone up to 793 this year because of recategorisation, The Law Society said. Those with five to 15 years' experience now count as "mid-tier", as these years are when many associates become partners.

Former lawyers told The Sunday Times that a combination of push and pull factors made them leave the sector. These include the long working hours and "transactional" nature of work - and for some, the desire to learn skills and find fulfilment outside the legal profession.

Ms Kendra Liew, 28, a former matrimonial lawyer who quit at the end of 2014, said: "A lot of the work is time-sensitive and demanding with little room for flexibility and error.

"I was not looking forward to work every day. I would wake up in the middle of the night to check e-mail and was constantly thinking about what to do the next day."

She now runs a business creating organic skincare products. "When you go in with those ideals, and you experience practice, you get disillusioned and feel like you aren't making a difference."

Mr Esmond Yue, who spent four years in corporate law in two firms, said his typical work day started at 7.30am and ended at 1am.

"The latest is just going to the office gym to shower and continue working till the next morning. Maybe you'll doze off for half an hour." 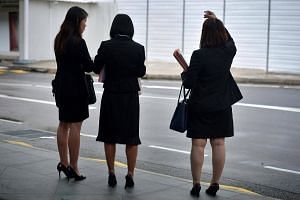 Support from family and friends helps 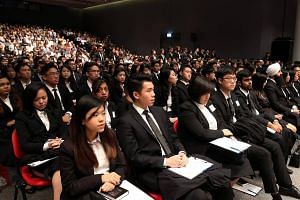 Billable hours not the only yardstick

Some like Mr Mark Cheng said it was the high-stress nature of the work that was draining. Said the 30-year-old, who spent two years in litigation at a mid-sized firm: "People are paying the lawyer to solve their problems and take their stress away. Suddenly you become that person with everyone's problems. That is very stressful. It's like a glorified sweat shop. Junior lawyers have a mountain of work that is tedious and time-consuming."

Some former lawyers said they found little ownership and meaning in their work. Mr Yue added: "You see only the legal aspects - a small part of a business - and you work on deals that seem so far-removed."

Work improved after he joined a foreign firm. "But I realised that's as good as it gets... I felt I wanted to learn more outside the law, like dealing with people, management skills," said the co-owner of a Japanese food business.

A 27-year-old lawyer who declined to be named tendered her resignation last month after three years in corporate law at one of the Big Four law firms.

"You don't have time for yourself, for family... It's common to have to work on weekends and settle things from home," she said, adding that she will return to the sector.

"I still like some of the work I'm doing... but this is something like a personal sabbatical. I just need a change in environment."

Mr Tan Chong Huat, managing partner of RHTLaw Taylor Wessing, acknowledged the increasing demands: "Competition and the demands of a more sophisticated clientele - the global climate aside - are shaping how firms behave.

"We become more productive and efficient and this puts a lot of pressure on our mid-tier lawyers."

Mr Edmund Koh, 31, who spent four years at one of the Big Four law firms in banking and financial disputes, left the field last year to co-run a start-up to help lawyers with legal research.

"I liked the intellectual challenge of law, but I wanted to have more exposure to business," he said. "A lot of people go in to law not knowing what the practice of law is like. Perhaps they are misled by the glamour of lawyers portrayed on TV.

"For every moment you spend in court, there are countless hours spent preparing for it."