Earlier this year, Ms Sonia Soh noticed that her employer was becoming tardy in paying her wages and Central Provident Fund contributions.

The 31-year-old, who was then a business development planner, saw the writing on the wall.

She went hunting for a new job.

Her first stop was the job placement centre in Hougang Central run by the North East Community Development Council (CDC).

"It was near where I live," said the Hougang resident. 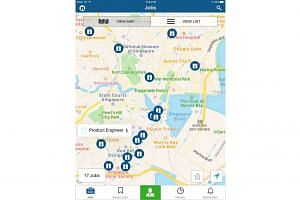 Find a job on map in new app

The centre found her a job within a month as a trainee manager at a local restaurant chain.

Job seekers like Ms Soh will soon have more neighbourhood job centres to turn to for help, with the opening of two more centres in Housing Board estates.

One is in Punggol and the other, in Toa Payoh.

With multiple centres, Singaporeans will enjoy greater access and convenience.

The Punggol centre, to be set up by North East CDC in January, caters to professionals, managers and executives (PMEs). The addition will expand the CDC's job placement network to seven centres.

At Toa Payoh, the new centre is the first branch to be set up by the Jurong-based Employment and Employability Institute (e2i), the training and job placement arm of the National Trades Union Congress (NTUC).

It opened its doors last month.

These various efforts come amid a slowing economy that has driven up the number of retrenched workers this year. A total of 11,890 were retrenched in the first nine months of this year and another 1,720 contract workers were asked to go early.

Manpower Minister Lim Swee Say had said earlier this month that the number of retrenched workers this year "will be higher than the whole of last year".

Many of those retrenched tend to be PMEs and North East District Mayor Teo Ser Luck, who is also Minister of State for Manpower, said more of them, especially the mature ones, are taking longer to land a job.

The new centre at the basement of Punggol 21 Community Club will cost about $250,000 to build and operate, said the CDC's deputy general manager Samuel Tok.

It will give information on job vacancies and training courses, and offer job-matching services.

"Hopefully, these services will give job seekers a higher chance of getting employed," said Mr Teo.

Mr Tok added that since the start of the year, more jobless PMEs have been turning up at his CDC to seek help but Workforce Singapore, a statutory board which oversees jobs and training, declined to disclose how many the CDC has helped.

At the Toa Payoh centre, which is about the size of seven five-room HDB flats, more than 30 workers provide such services as counselling and training needs assessment.

"With multiple centres, Singaporeans will enjoy greater access and convenience,'' he said.

Ms Soh added that a job centre's success depends as well on its career counsellors being able to give one-to-one attention to job seekers.

"Also important is the range and quality of jobs available, so that people can have more choices," she said.

A version of this article appeared in the print edition of The Straits Times on November 21, 2016, with the headline 'Job seekers to have access to more help in the neighbourhood'. Subscribe
Topics:
More
Whatsapp Linkedin FB Messenger Telegram Reddit WeChat Pinterest Print Purchase Article Copy permalink