SINGAPORE - More workers were injured on the job in the first half of this year.

A total of 6,561 workplace injuries were recorded between January and June this year, an increase from 6,073 in the same period last year.

But workplace deaths have taken a dip to reach a seven-year low.

Seventeen workers died on the job from January to June this year, down from 18 in the same period last year and 23 in the second half of last year.

"This was the lowest absolute number of workplace fatalities since 2012, when fatality data for all workplaces was tracked," said the Ministry of Manpower and Workplace Safety and Health (WSH) Council on Monday (Sept 30) in the release of the half-year workplace safety statistics.

Six of the 17 deaths took place at construction sites while two occurred in the manufacturing sector.

The top cause of injuries, both major and minor, were from falling, slipping and tripping at work.

These resulted in 87 major injuries such as fractures in the first half of this year, down from 111 in the same period last year.

There were 1,757 minor injuries such as bruises and sprains, an increase from 1,630 between January and June last year. The second most common cause of injuries involved machinery. There were 41 major and 1,066 minor machinery-related injuries between January and June this year, up from 35 and 956 in the same period last year.

Meanwhile, the workplace became less hazardous in another area. The number of occupational diseases fell to 263 in the first half of this year, down from 295 between January and June last year.

There were also fewer dangerous occurrences where no one was injured but which had the potential to cause serious injury and death. There were eight such near-misses in the first half of this year compared with 10 in the same period last year.

The sectors with the most number of fatal and major workplace injuries were construction, manufacturing, and transportation and storage. 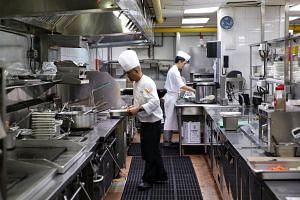 Protecting the injured at work better

The number of workplace injuries also increased in accommodation and food services, wholesale and retail trade, and professional services.

"It is encouraging that the first half of 2019 recorded the lowest half-yearly number of fatalities. However, we cannot be complacent, as non-fatal injuries continue to rise, including in industries that were previously less accident-prone," said Mr Christopher Koh, MOM's director of policy, information and corporate services.

MOM said that it conducted 2,500 spot checks in the first six months of this year. These checks found 4,300 workplace safety and health violations and 29 companies were ordered to stop work for an average of four weeks each to correct their lapses.

The ministry said it plans to conduct 2,500 inspections in the second half of this year as it continues to target the top injury-prone industries, as well as those that have seen a rise in major injuries.

It also warned that it will start releasing the workplace safety records of companies next year.

"(MOM) will publish injury statistics of companies, starting with the construction industry in 2020, so that safer companies will stand a better chance at securing business," said Mr Koh.

As workplaces become increasingly desk-bound, long work hours and a stressful workplace environment can result in mental health issues such as burnout, he said. “We need to protect our workers who may be suffering in silence.”