SINGAPORE - Employers of eligible Singaporean workers must make full Central Provident Fund contributions for their staff by Jan 14 in order to get the Wage Credit Scheme (WCS) payouts in March.

To qualify for the sixth tranche of the payouts, employers must have raised the gross monthly wages of their Singaporean employees by at least $50 this year, or maintained the previous wage increase of at least $50 from 2017, or both.

Employers should also have paid their staff's mandatory CPF contributions for this year's wages to the CPF Board by Jan 14, said a joint statement from the Inland Revenue Authority of Singapore (Iras) and Ministry of Finance (MOF) on Wednesday (Dec 26).

Employers do not need to apply to receive the WCS payouts.

The taxman will inform them by March if they are eligible, and payouts will be credited directly into bank accounts or cheques will be issued.

A new method of direct crediting can also be used for this tranche. Employers registered with PayNow Corporate will receive their payouts to their registered bank accounts.

Employers not on the direct crediting modes have been encouraged to sign up for them by Jan 14. 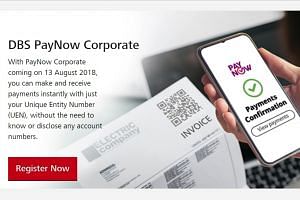 PayNow Corporate was launched in August this year. It allows businesses and the Singapore Government to instantly pay and receive money using the organisations' unique entity numbers.

The WCS began as a three-year initiative from 2013 to 2015 to support business embarking on transformation efforts and to encourage the sharing of productivity gains with workers. It was extended by another two years after 2015.

In the Budget earlier this year, the scheme was announced to be continued for another three years till 2020.

For 2018, the Government will co-fund 20 per cent of pay increases to Singaporean workers earning a gross monthly wage of up to $4,000.

Iras and MOF also warned that anyone caught abusing the scheme can be charged under Section 420 of the Penal Code and face a jail term of up to 10 years and a fine.