SINGAPORE - There were eight workplace fatalities in the Republic for the first four months of this year, outgoing Minister of State for Manpower Sam Tan revealed on Sunday (April 29).

Mr Tan reminded employers, workers, public agencies and other stakeholders that eliminating such accidents is their collective responsibility.

One incident this year took place on March 1 when a 48-year-old Malaysian man died after falling from a platform 2.5m above the ground at the Lentor MRT station worksite.

Prevention is better than cure, Mr Tan said on Sunday (April 29) during a Foreign Workers' Carnival organised by the Singapore Contractors Association (Scal).

For example, workers can report near-miss incidents to their employers using the Workplace Safety and Health Council's SnapSAFE mobile application, which will allow employers can put safety measures in place.

"This is a good way for companies to cultivate a culture of safety as everyone is encouraged to take ownership of safe practices," said Mr Tan, who will be leaving the Manpower Ministry for a new role at the Social and Family Development Ministry as part of the latest Cabinet reshuffle.

He added that the Manpower Ministry (MOM) is also communicating to workers in their native languages to educate them on the steps they can take if they get injured, and the help available to them.

During Sunday's event, for example, MOM officers offered advice to the 2,000-plus construction workers at the event about the Work Injury Compensation Act.

They were also polled about their attitudes toward reporting injuries to their employers, and possible reasons why they may be hesitant to do so, for an internal MOM survey.

Mr Tan said: "Our foreign workers come from far and wide to build world-class physical infrastructures in Singapore. It is only right that we provide a safe and healthy working environment for them." 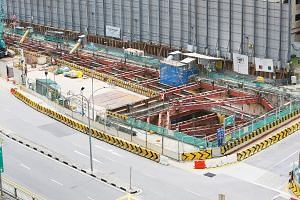 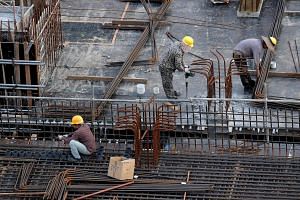 On Sunday (April 29), some 2,000 foreign workers turned up at the inaugural Foreign Workers' Carnival organised by Scal at its Recreation Centre in Boon Lay.

The carnival, organised in conjunction with Labour Day on Tuesday (May1), was the first such event organised by the association to show appreciation for foreign workers in the construction sector.

Other than food and games, the workers were also treated to entertainment acts as well as an instant photo booth session.

Each worker also received a goodie bag and took part in a lucky draw with prizes such as smartphones and grocery vouchers.

He added: "We also hope to encourage our members to play a more direct role in taking care their workers' welfare and well-being."

Construction worker Vinoth Kumar Rajan, 25, who is from India and was at the carnival, said: "Usually, we work everyday, so I enjoyed the fun activities. I had a lot of fun, I felt so happy."