SINGAPORE - Around $15 million in salaries owed to employees in Singapore was recovered between April 2018 and March this year.

About 89 per cent of 5,773 employees fully recovered their salaries after their claims were resolved at the Tripartite Alliance for Dispute Management (TADM) or the Employment Claims Tribunals.

These figures were released by the Tripartite Alliance Limited (TAL) in its inaugural annual report for the fiscal year ended March 31, 2019, on Wednesday (Sept 25).

In comparison, about $5 million in salary arrears was recovered by TADM between April and September 2017, with about 90 per cent of employees who lodged claims fully recovering their salaries. TAL was unable to provide full-year figures for the 2017-2018 period.

TAL was set up by the Ministry of Manpower (MOM), National Trades Union Congress (NTUC) and Singapore National Employers Federation (Snef) in 2016.

It is the first time that the company, which oversees the Tripartite Alliance for Fair and Progressive Employment Practices (Tafep), TADM, and the Workplace Safety and Health (WSH) Council, has released details for all three organisations in a combined report.

The mediation services were also expanded to cover wrongful dismissal claims, and this was made available in April to professionals, managers and executives earning more than $4,500.

In December last year, six local workers and three foreign workers approached TADM for help after their salaries were withheld for three months when the global market research firm they were working at was acquired by another company. 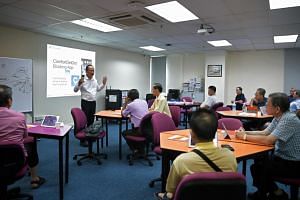 The firm's director, who was based overseas, was told by TADM to attend a mediation session in Singapore.

During the mediation, the company's director revealed that the firm lacked funds to pay workers' salaries, and admitted that salaries were not paid for three months.

MOM was alerted to the case and later issued a warning against the company. The employees eventually received their salaries in full.

Meanwhile, there were more complaints about issues such as workplace discrimination or harassment in Singapore last year. A total of 357 cases were reported to Tafep in 2018, up from 215 complaints in 2017.

The increased number of complaints last year was attributed to the expanded scope of issues handled by Tafep, including issues such as workplace harassment and unfair contractual terms, the report said.

Checks on the firm and its refusal to provide further information on its employment process showed signs of possible infringements of fair hiring practices, which led Tafep to inform MOM of the case.

The ministry found that the company failed to consider all applicants, including Singaporeans, and issued a warning letter against the firm. Officials of the firm were also asked to attend a course on fair employment practices.

In 2018, Tafep introduced several new tripartite standards, including those on age-friendly workplace practices and contracting with self-employed persons.

As of March this year, 2,327 companies with 627,000 employees have adopted the tripartite standards administered by Tafep.

The WSH Council also elevated standards for workplace safety and health through its campaigns and outreach efforts over the last year.

These included a campaign aimed at drawing awareness to the prevention of machinery-related hand and finger injuries at the workplace, and a programme targeting good vehicular safety practices.

TAL chairman Stephen Lee said the company will evolve its services and processes to continue meeting the needs of employers and workers in the coming years.

He added that TAL's plans include having an alumni society to foster trust and sustain relationships among MOM, NTUC and Snef leaders.