As unemployment and layoffs continue to rise, the Government is exploring how to do more with the online job hunt at its first virtual career fair for white-collar job seekers.

The Adapt and Grow Virtual Career Fair, which started last Wednesday, was midway through when the Manpower Ministry released its sobering labour market report on Thursday.

The two-week virtual fair by the Singapore Workforce Development Agency (WDA) is meant to help job seekers expand their network and connect online with 51 potential employers.

These companies, in sectors such as infocommunications and technology, aerospace and biomedical sciences, have 500 vacancies with a median salary of $4,500 a month.

Close to 400 Web chats, which are conducted on an online portal, have been lined up for job seekers with either potential employers or career coaches. 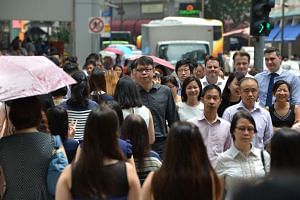 Tough times ahead but Singapore workers to get more help

While the virtual fair is running until next Wednesday, a physical fair was held yesterday afternoon at the Devan Nair Institute for Employment and Employability in Jurong for job seekers who prefer to meet employers in person.

Besides getting to speak to more than 25 employers, they could also attend motivational workshops on topics such as interview preparation and personal grooming.

Manpower Minister Lim Swee Say, who was at the event, said the virtual fair was a cheaper and faster way to match job seekers - especially professionals, managers, executives and technicians - with available jobs.

He said that since the virtual fair started, about 2,000 people have signed up and 300 of them have submitted 1,000 applications through the platform.

While the WDA will continue to hold physical job fairs for rank-and- file workers, Mr Lim said that virtual fairs, which are not constrained by capacity, are more likely to attract employers with quality jobs.

"It has been very difficult to find local candidates as many people would rather go for multinational corporations," said its director Vivilian William, 37, who found the virtual fair's chatroom system convenient for sifting through applicants.

Mr Yeo Ying Yong said he used the virtual portal but decided to attend the physical fair to meet employers in person, as not many were online when he was. He has applied for jobs in six organisations.

The 33-year-old, who quit his job as a Web applications consultant last month, suggested more resources for the online portal, including mock technical tests that IT professionals like him must take as part of the application process.