Professionals, managers, executives and technicians (PMETs) continued to make up the majority of retrenched residents in the first three months of this year, and will bear the brunt as the employment outlook worsens, say experts.

Close to 70 per cent of retrenched residents were PMETs, as they form a higher share of the workforce and were more prone to such job losses, the Ministry of Manpower (MOM) said in its labour market report yesterday.

This remains higher than the share of PMETs in the workforce, who are vulnerable to job loss due to technological disruption and slowing economic growth, said DBS senior economist Irvin Seah.

Another contributory factor is that although the authorities have tightened policies on hiring lower-skilled workers from abroad for many years, the tightening for mid-to higher-skilled roles is comparatively less.

"We are heading into an (economic) down cycle, and it will play out on the labour market. PMETs will be the ones who bear the brunt," said Mr Seah, who expects improvement in growth only in the later part of the year.

National Trades Union Congress assistant secretary-general Patrick Tay stressed the need to support PMETs, who will continue to make up most of the layoffs. He added: "If you look at the profile of retrenched residents... degree holders and older workers are more vulnerable." 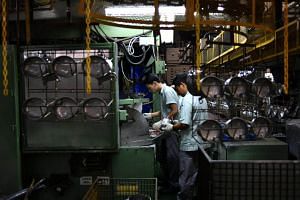 A key issue is the job-skill mismatch, with PMET jobs typically requiring deep expertise, he said, noting the need to train workers in areas of growth such as professional services as well as information and communications technology, taking a proactive approach ahead of disruption.

Mr Seah added that apart from professional conversion programmes, the Government can consider other measures such as a temporary deferment of income tax payments for retrenched workers.

Yesterday, MOM also said that the seasonally adjusted resident long-term unemployment rate for residents aged below 30 rose from 0.5 per cent to 0.9 per cent over the quarter, after trending down from December 2017.

This refers to the share of residents in the labour force who were unemployed for at least 25 weeks.

As a larger proportion of job seekers below 30 left previous employment due to job dissatisfaction, MOM said that they are more likely to invest time to search for a better job match.

Mr Tay cautioned that the longer the workers stay out of the workforce, the harder it tends to be for them to re-enter it.

He added that apprenticeships, internships and work trial programmes are available to help workers transit to new employers or industries, adding that NTUC can do more to provide support.

While it is the first time in recent years such a sharp pickup in long-term unemployment for residents under 30 has been seen, Mr Seah added that it is a point of concern, expressing worry for the younger Singaporeans' employment prospects.

The MOM report also showed that while the six-month re-entry rate among retrenched residents rose for a second consecutive quarter, to 66 per cent, this was not the case for residents below 30.

PMETs and degree holders continued to observe below-average re-entry rates as well, although their rates have trended up from the first quarter of 2018, said MOM.

There were still more job vacancies than in the same period a year ago, with PMET openings contributing the bulk of the increase. These are mainly in areas such as financial services and professional services.

A version of this article appeared in the print edition of The Straits Times on June 14, 2019, with the headline 'Bulk of retrenched residents in Q1 are PMETs'. Subscribe
Topics:
More
Whatsapp Linkedin FB Messenger Telegram Reddit WeChat Pinterest Print Purchase Article Copy permalink