SINGAPORE - Security officers will be paid more while working fewer overtime hours each month in future.

They will see their basic pay go up by around $300 by 2021, and also receive an annual increment of at least 3 per cent in the three years after that, under recommendations the Government accepted on Thursday (Nov 23).

All security officers will be allowed to put in a maximum of only 72 overtime (OT) hours a month.

The current practice - in which security companies apply for OT exemptions so their employees can work past this limit - will be discontinued from 2021.

The higher basic pay and subsequent annual increments are intended to offset the cap on OT hours.

Security agencies must adopt the new recommendations from Jan 1, 2019.

The Security Tripartite Cluster (STC) unveiled details of its proposals on Thursday. It made the recommendations in a bid to draw younger Singaporeans to a sector that has seen a growth in demand for security officers with more buildings and infrastructure built, and the rising threat of terrorism. 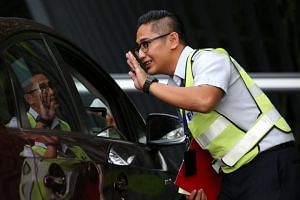 STC chairman Zainal Sapari, an assistant secretary-general at the National Trades Union Congress, said security officers surveyed often cite excessive working hours as a reason they leave the industry. They also need enough rest to be able to do their job well.

"To attract youngsters or make it practical for older people to join the industry, reducing overtime is something that must be done," he said.

The changes, which follow a review of the progressive wage model in the security industry, will benefit more than 34,000 Singaporean and permanent residents working as security officers here.

The progressive wage model is a wage ladder that aims to raise the salaries of low-wage workers through skills upgrading and improvements in productivity.

The model is compulsory for companies licensed in the cleaning, security and landscape sectors.

It specifies a starting wage of at least $1,100 a month for security officers, with salaries going up to $1,300, and more for those who are higher-skilled.

Under the progressive wage model, security supervisors are to be paid a starting wage of $1,500.

Between 2014 and 2016, the median basic wages of full-time security guards grew by 23 per cent per year.

The STC said the higher increments are to ensure security officers' gross wages will not be "adversely affected due to a reduction in overtime hours".

The security sector has the highest average weekly overtime per worker, according to a 2014 report by the STC, which first mooted removing OT exemptions in 2014. Security officers clock as many as 95 hours of overtime each month.

Currently, overtime exemption is not granted for work that is undertaken in certain conditions, such as work that requires continuous and manual operation of machinery, or work at elevated heights.

The STC also recommended an annual increase of at least 3 per cent to wages from 2022 to 2024, subject to review.

This will mitigate any wage reset for the security officers when the contract is renewed or a new service contract is awarded to a different service provider, said the STC.

The STC urged security agencies to start planning early and to work with their service buyers to review their operations and manpower needs.

"Leveraging technology solutions to augment the manpower supply in a tight labour market would be one of the most effective ways to derive better security outcomes and yet moderate increasingly higher manpower costs."

Mr Robert Wiener, president of the Association of Certified Security Agencies, said the association is hoping to work with buyers from building management offices to use more technology in security services.

This could reduce costs in the long run, despite the initial hike in wage costs, he said.

"Any initial investment in technology solutions can be typically recouped in about 24 months," he added.