SINGAPORE - At least a dozen Bangladeshi construction workers are in limbo in Singapore over unpaid salary claims amounting to thousands of dollars per worker.

Their employer, Mr Shah Jahan of SJH Trading, has disputed their claims.

While their cases are being handled by the authorities, the workers have had their work permits cancelled, leaving them unable to work or to support themselves as they wait for their claims to be resolved.

The workers filed their salary claims with the Manpower Ministry (MOM) earlier this year, and their claims went for mediation before the Tripartite Alliance for Dispute Management. But mediation failed, and the claims have been escalated to the Employment Claims Tribunals (ECT).

Most were in their 40s, and had contracts stating they were to be paid a monthly salary of $1,600, excluding overtime pay.

Their main complaint was that they were underpaid salaries and their pay slips were falsified.

The workers claimed that soon after they arrived in Singapore, they were taken to Mr Shah Jahan's office in Jalan Sultan and asked to stamp their fingerprint in ink, on blank salary vouchers.

Those who initially refused to do so said they were threatened with cancellation of their work permits, and told they would be sent home.

This was not an option for many of them, who took loans of around $7,000 to come to Singapore. 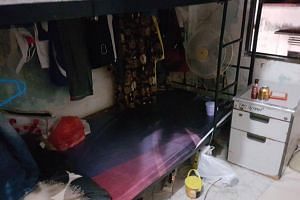 One of them, Mr Hasan Mehedi, 46, arrived in Singapore on Jan 12 and is the sole breadwinner for his nine family members.

Mr Hasan, who is claiming $15,910 in unpaid salary and overtime work, told The Sunday Times: "I said, there's no writing, I can't stamp it. He said: If today you don't stamp, you'll be sent back home.

"I was very scared. To come to Singapore, I took a bank loan. Every month, I have to repay $600. If this paper was not signed, he would send me back to Bangladesh. That's why (although it was) blank paper, I stamped and signed it," he added.

The workers said that their boss wrote on the blank vouchers that he had paid them their full salaries.

Because the documents bore their signatures, Mr Shah Jahan could use them as "proof" that his workers acknowledged receiving their rightful salaries. But in practice, he paid them much less than the $1,600 they were promised on paper, they said.

"May, June, July, three months gone, 10 cents also he did not give me," he said, adding that when he asked his boss why he was not paid, his work permit was cancelled the next day, on July 11.

Other workers claimed that they signed vouchers for small amounts like $50, which Mr Shah Jahan later changed to $1,650, for instance, by adding digits in front.

A check of Accounting and Corporate Regulatory Authority records yesterday showed that SJH Trading was set up in March 2015. The company, which has a paid up capital of $112,000, is owned by two Bangladesh nationals - Mr M.A. Ahmed, who lives in Dhaka, Bangladesh, and Ms Sumaya Jahan, who lives in a Woodlands Housing Board flat.

When contacted on the phone, Mr Shah Jahan said that he is the manager of the company, Sumaya is his daughter and his wife Madam Lutfor Nahar is the director.

He denied that he underpaid the workers. "I have evidence," he said, referring to the pay slips.

Mr Shah Jahan, 53, said he came to Singapore from Bangladesh in 1991 and became a permanent resident here in 1998. He said that his construction and renovation company has 130 workers and only 13 have complained to the MOM. "They want to condemn my name," he said on why the workers complained to the MOM, adding: "If MOM orders me to pay, I will pay."

A handful of workers also told The Sunday Times on Friday that they were not properly fed and were given stale food.

Mr Shah Jahan said that food for the workers is cooked at a Geylang Road shophouse, which is also used to house some workers.

"I give them quality food," he said. "I provide my own catering food, one of my worker cook. I cannot provide 5-star hotel food."

When The Sunday Times visited the third storey of a shophouse at Lorong 13 Geylang on Friday night, an open pot of curry and an uncovered pot of yellow rice were being cooked in a kitchen about the size of half a parking space, next to two toilet cubicles.

Two large rice cookers, blackened with grime, and an LPG gas tank were in a corner of the kitchen. Packs of rice, meant for consumption on Saturday, were packed and stacked on a plastic basket. Sacks of potatoes were stacked next to more than 20 pairs of shoes on a rack along a corridor between the kitchen and three bedrooms.

The reporters also saw 12 workers in the shophouse, but one of them, who identified himself as the foreman, said that only eight live there.

"The rest are visiting," he said.

The Urban Redevelopment Authority said in May that private residential properties may no longer be rented to more than six unrelated persons. But existing tenancy agreements which adhere to the previous cap of seven to eight tenants will be allowed to run till May 2019.

The Migrant Workers' Centre (MWC), a foreign workers' advocacy and welfare group backed by MOM, the National Trades Union Congress and employers, said the workers approached the centre for help several weeks ago.

"We are helping them," said MWC executive director Bernard Menon. "Employers are responsible for food and lodging while the workers' complaints are being processed."

Mr Hasan said that he hopes publicity on the workers' plight can prevent other Bangladeshi workers from suffering the same fate.

"I suffer (now), but if my story is known, other Bangladeshi workers won't suffer like I did."