SINGAPORE - A total of 160,000 Singaporeans started using their SkillsFuture Credit last year, bringing the total number of users to more than 285,000 since the scheme was launched in 2016.

This was up from the 126,000 in 2016 who made use of the scheme, which provides all Singaporeans aged 25 and above with $500 to use on training courses and is part of the Government’s plan to promote lifelong learning.

Giving the media an update on Thursday (Feb 1), SkillsFuture Singapore (SSG) chief executive Ng Cher Pong said the take-up of various SkillsFuture programmes is a good sign that Singaporeans are charting their own learning and career paths.

Mr Ng also launched a plan to raise the quality of the training and adult education (TAE) sector, so as to support companies as they transform and help Singaporean workers stay competitive.
The TAE industry transformation map focuses on driving innovation, professionalising jobs and raising productivity in the sector, which employs about 20,000 professionals. The plan is one half of the education industry transformation map - the other half is for the early childhood sector.
Jobs in the TAE sector include business development, which involves working with companies to identify training needs and solutions; and trainers and curriculum developers.
Mr Ng said the agency hopes the roadmap will encourage training providers to make learning more relevant and accessible to workers, and help them improve their courses through better feedback gathering from users.
“We believe this industry serves as a critical supporting infrastructure for all other industries, particularly as they embark on industry transformation,” he said, adding that there must be quality training solutions that evolve together with changing industry needs.

The agency is also developing a skills framework for the sector to provide key information on career pathways, skills required and training courses available, which is expected to be ready by the end of this year.

One concern about the SkillsFuture scheme is how it has been plagued by scams, including a case reported in December in which SSG was cheated of nearly $40 million, the biggest case of a government agency being defrauded here.
Asked about the false claim scams on Thursday, Mr Ng said major internal changes are being made, and more updates on a data analytics fraud detection system being installed will be provided later on. He noted, however, that changes in internal processes should not make it harder for people to upgrade their skills.
“We should not make Singaporeans suffer because of a few black sheep,” he said at the media briefing at the agency’s office in One Marina Boulevard.
Many bosses do recognise the need to upskill and reskill their workers as they transform their businesses, but there is still some resistance from employers, especially smaller ones, he added.
They may not know what training opportunities are available or may not have the capabilities to draw up and implement training plans for workers.
This is why the agency has set up an enterprise engagement office last month to reach out to more employers, he said. It will work with other government agencies and trade associations and chambers. 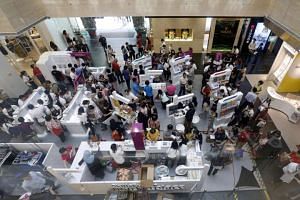