A 44-year-old man with a history of diabetes has died from Covid-19 complications, bringing to 35 the number of deaths in Singapore linked to the virus.

The man, a permanent resident, worked at Tektronix Southeast Asia and is linked to the Tektronix cluster of eight people. He was not vaccinated, the Ministry of Health (MOH) said yesterday.

He was admitted to Alexandra Hospital on May 25 and died on Sunday.

The ministry, in a statement, said: "To disrupt any wider, undetected community transmission, we will conduct special testing operations for all staff who have been working at the premises." Details of the operations can be found at go.gov.sg/bmc-ntuc-testing

Free testing will also be available to those who visited the supermarket between June 3 and yesterday.

MOH said they should monitor their health closely, and reduce social interactions as far as possible for 14 days from their date of visit.

They should see a doctor immediately if they feel unwell, it added.

The first is a 33-year-old nurse from Mount Elizabeth Novena Hospital. She was not involved in direct patient care and was last at work last Thursday. She developed a sore throat and runny nose the next day, and was tested on Saturday when she went to a general practitioner's clinic. Her earlier tests from rostered routine testing - the last was on June 7 - were negative and she has been fully vaccinated.

The other two unlinked community cases are a 38-year-old foreign domestic worker and a 29-year-old delivery rider with foodpanda.

Meanwhile, the cluster at Bukit Merah View Market and Food Centre has grown to 78 people. New cases include a 37-year-old chef at Holiday Inn Singapore Atrium who also works as a part-time delivery driver for Lalamove Singapore, as well as a 23-year-old stall assistant at Tiong Bahru Yong Tao Hu Coffeeshop. 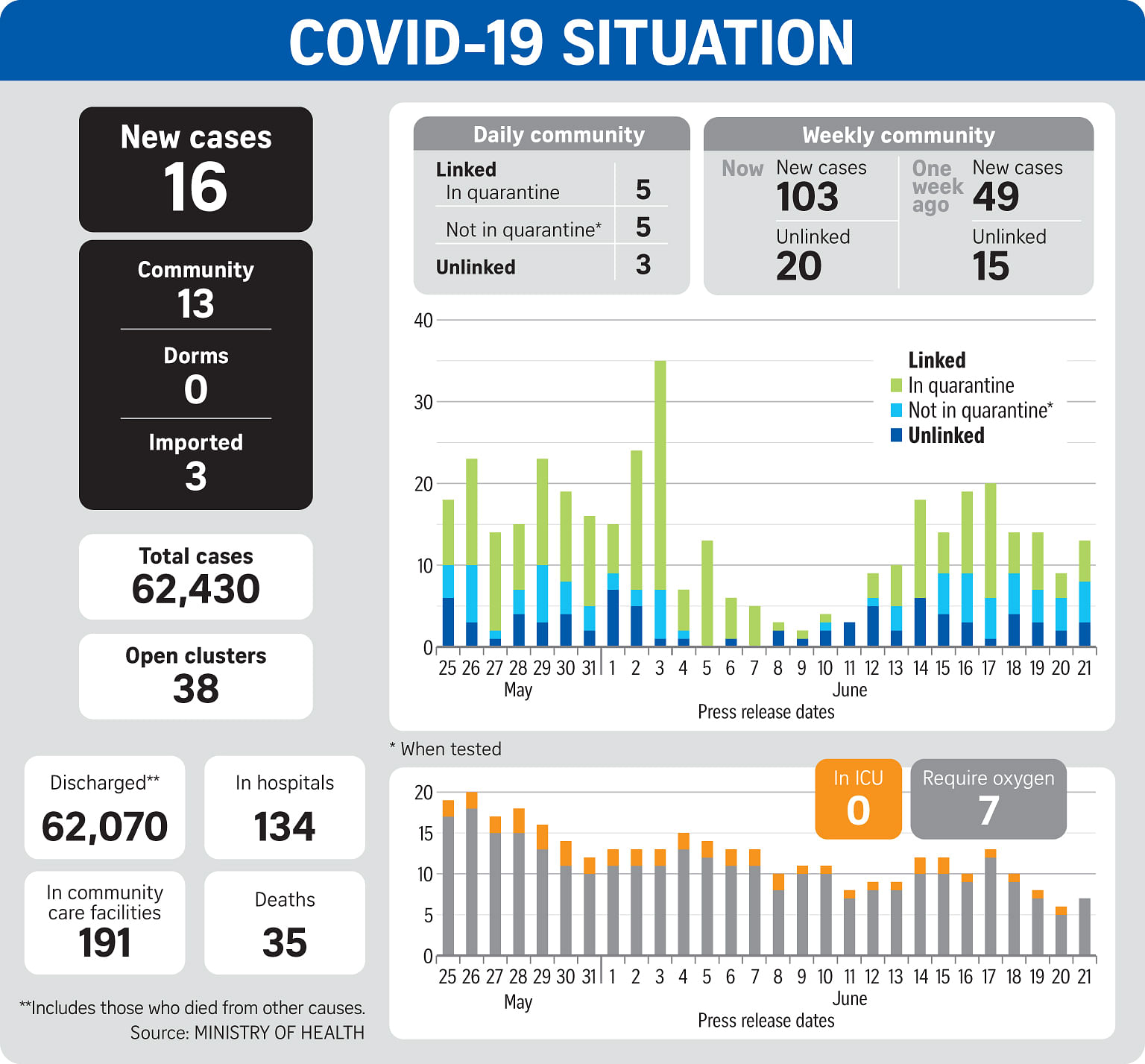 Another two patients yesterday were linked to a new cluster of five cases at 119 Bukit Merah View, MOH said. They were detected as part of community surveillance testing on Sunday. One is a 63-year-old cleaner at Enabling Village (20 Lengkok Bahru) employed by CSP Maintenance, and the other is a member of his family.

Yesterday, there were 13 community cases - eight were detected from surveillance while five were already in quarantine when tested.

There were also three imported cases who were placed on stay-home notice when they arrived in Singapore.The new cases take Singapore's tally to 62,430.

MOH said there were 103 community cases in the past week, up from 49 in the week before. The number of unlinked cases has also risen from 15 two weeks ago to 20 in the past week.

A total of 134 cases remain in hospital. All are stable or improving. Another 191 are isolated and cared for at community facilities.