SINGAPORE - The man who posted a comment on Facebook saying he wanted to throw an egg at Law and Home Affairs Minister K. Shanmugam said the remark was meant as a joke.

Mr Edmund Zhong, 20, a full-time national serviceman in the army, on Tuesday (March 26) said he had no ill intentions and did not have any plans to carry out the act.

Mr Anning, who stirred controversy for blaming the Christchurch shootings on Muslims, was hit with an egg on his head by a 17-year-boy at a Melbourne event on March 16.

Mr Zhong commented on a Channel NewsAsia Facebook post on Mr Anning, saying: "I wanna do that to K Shanmugam. I swear."

The police on Monday said a report was lodged against Mr Zhong for the comment. He and a 47-year-old man are currently assisting with investigations for the offence of communicating an electronic record to incite violence under Section 267C of the Penal Code.

The older man had responded to Mr Zhong's comment with information on the minister's upcoming Meet-the-People session. 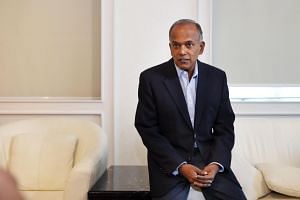 Under Section 267C, any incitement of violence "to the law or to any lawful order of a public servant" is punishable with a fine and up to five years' jail.

Said Mr Zhong on Tuesday: "I just commented to draw a link to our local context, and then another guy just added fuel to the fire. I don't even know the guy at all."

He said the police took his statement on Tuesday, and he told them he had no other intention of making that comment, except "for entertainment".

He said: "To be honest, I don't feel much regret. I feel it's a matter of freedom of speech, and that we have a right to voice such opinions."

The incident has raised questions on what constitutes inciting violence.

Mr Ashwin Ganapathy, a lawyer at IRB Law, said that in Mr Zhong's case, the authorities would have to prove that there was an intention to incite violence.

"The violence is not just in persuading or suggesting. It must go further. It must at least instigate, spur or stimulate vigorously an action."

He said a prime example would be hate or inflammatory speech.

"Saying that you want to egg Mr Shanmugam, without doing or saying anything more, is unlikely to fall within the ambit of the provision," he said.

"It would also appear that this person made the comments in jest and with absolutely no intention to incite violence."

Mr Rajan Supramaniam, criminal lawyer and managing director of Hilborne Law, said that the action taken by the police is to send a strong signal against irresponsible and extreme Facebook postings.

“The comment was directed at a minister, who is a public servant. If social media becomes an entirely unregulated space, other ministers will also become targets.”

He explained that this action will serve as a deterrent for like-minded people, and show that there are consequences to posting comments like that on Facebook.

Mr Ashwin said Section 267C of the Penal Code has its roots in protecting public harmony and peace.

If a threat is made directly to a person and does not involve threats to the public, it is likely to fall under other laws such as the Protection from Harassment Act or criminal intimidation.

If Mr Zhong had actually gone on to throw an egg at the minister, he would have also been charged with using criminal force or causing hurt, said Mr Ashwin.

"Whoever intentionally uses force on another person, without the person's consent, commits an offence of criminal force," he said.

And in terms of liability, it does not matter whether a slight or severe degree of force is used. These considerations can, however, be taken into account during sentencing, he said.

Mr Rajan added that the second man was also likely investigated to establish whether there is a connection between the two, despite him not having posted the initial comment.

“During investigation, police have the powers to call up all the relevant people. Perhaps they want to know if the second guy was privy to the whole thing, and look into whether there’s a case of common intention or abetment.”

Assistant Professor Liew Kai Khiun from Nanyang Technological University’s Wee Kim Wee School of Communication and Information said that in the social media age, people tend to forget the impact of their words.

“Basically, people forget that their conversations, however tongue-in-cheek, are actually published and openly seen by a larger public,” he said.

“What was seen as a private joke, can now be reinterpreted as a public threat.”

He said that people should be more aware, given that whatever is written on social media platforms, can be used as legal evidence in the court of law.

However, he added that what people say should be taken along with a consideration of their intentions, such as whether it was indeed malicious.

On Wednesday morning, Mr Shanmugam acknowledged that he had seen Mr Zhong's comments, which he called "the somewhat exaggerated words of a young man" that he laughed off.

However, he added: "I can laugh off these comments, but understandably, (the) police can’t."

He added that he was "much more concerned" about Mr Zhong's public comments on Facebook about his attitude towards narcotics.

On his Facebook page, Mr Zhong identifies himself as an "Advocator at Singapore Cannabis Awareness" and has several posts that seemingly support the use of the drug.

In a post on March 2, he wrote: "Legalise it or not we will smoke it anyways."

Mr Shanmugam said: "I hope he does not actually experiment further with cannabis, regardless of how desirable he thinks drugs are."