SINGAPORE - Mr Aw Kian Chow, who sued the Sembawang Town Council after he became paralysed from a fall in a sheltered walkway, died on Saturday (March 26).

Mr Aw, 59, slipped and fell at a sloping ramp while walking home one rainy evening in August 2008.

The former accountant injured his spinal cord and was a tetraplegic - paralysed from the neck down.

Mr Aw had sued the town council for negligence, seeking unspecified damages for the injuries he suffered, pain and suffering, loss of earnings and medical expenses. 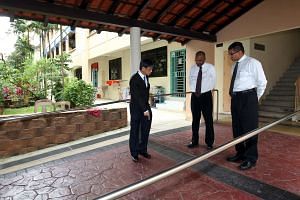 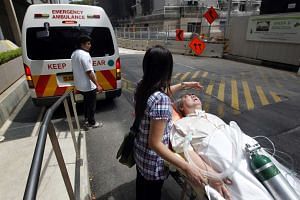 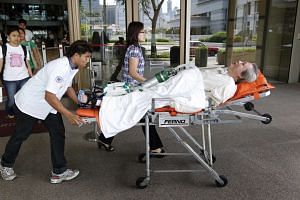 After the accident, he needed two caregivers, required full artificial life support and was bedridden.

His family sold their Sembawang flat to fund his medical fees, and moved into a relative's vacant apartment.

He and the town council came to a confidential settlement in 2013 after the case was heard in the High Court for two days.

His wife, Madam Angeline Zeng, was out doing volunteer work when Mr Aw was rushed to hospital, Lianhe Wanbao reported.

His condition had stabilised in recent years, but he spent more than 10 days in intensive care last month after experiencing breathing difficulties.

On Saturday, one of their maids called Madam Zeng at around noon to tell her that Mr Aw had been admitted to hospital again. He died that day.

She and her husband used to work long hours, but now spent more time together and with their children.

The couple have two teenage daughters, aged 15 and 18.

Their children kissed their father goodbye when they left the house, read to him and told him their problems, Madam Zeng said.

"We knew this day would come, but I really cannot accept it," she said.