He and three other players from Singapore will be playing in their first international wheelchair rugby meet in Jakarta next week (Thursday, Oct 6).

He survived, but his hands and feet turned gangrenous and had to be amputated.

While depressed at first, he has been adapting well to his new life, and by early this year, was eating on his own and moving about independently in his wheelchair.

Mr Tan said he joined the Singapore wheelchair rugby team in June, when it was first set up. 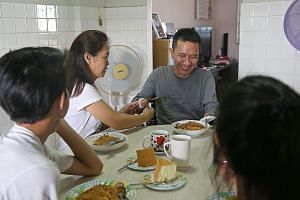 Facing the world with a smile despite disability 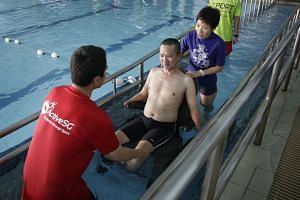 New centres will help disabled be active and more confident

There are now more than 10 members in the team, said Mr Tan.

"I'm excited, and eager to compete," Mr Tan told The Straits Times over the phone in Mandarin. His enthusiasm about his new sport came through even over the phone.

Wheelchair rugby was once called murderball - no body contact is allowed, but the wheelchairs collide and crash into each other with ferocity.

Teams of four players, who have to have a disability that affects both their arms and legs, compete in specially designed wheelchairs on a basketball court.

The pace is frantic as each team has only 40 seconds to score a goal by carrying the ball across the opposing team's goal line.

Mr Tan said he endures the abrasions and bruises he gets as the game is too exciting to resist.

"I get injured every practice," he said. "But I can't resist the temptation."

"First training, he already pushed the chair so well," he said.

Mr Singh has been actively promoting wheelchair rugby in Singapore and is confident the country can send a national team to the next Asean Para Games, to be held in 2017.

"I'm happy and surprised that the team is getting bigger, interest is growing faster than I expected," he said.

Wheelchair rugby and wheelchair basketball are "crowd pullers", he told The Straits Times, describing how the athletes manouevre their wheelchairs and twist their bodies to play the physically challenging sports.

Mr Singh, founder of DNR Wheels, estimates that nine countries will be participating in the competition in Jakarta this week, including Australia, South Korea, Thailand, Malaysia and Japan.