SINGAPORE - Days after an ofo bike was thrown from the 30th storey of a HDB block, another case of bike abuse has surfaced.

This time, a youth is seen throwing an oBike bicycle into a canal in a Snapchat video.

The Straits Times understands that the incident happened late on Thursday night. A video clip of the Snapchat was sent to Stomp.

It starts with a shirtless young man hurling a yellow bicycle into a canal.

He also rides a bike into a dustbin, and cruises on a road, very near to a public bus.

Police confirmed that a report on the incident was lodged and investigations are ongoing.

Bike company ofo said that it made a police report, and did not share further details on the case, as it is working with the police and other authorities to investigate the matter.

"We treat these incidents very seriously, and this is something that goes beyond vandalism and bike misuse, as it poses a threat to the safety of everyone around," a spokesman said.

"We also wholeheartedly encourage anyone with knowledge of the perpetrators to offer any information they possess to local authorities, or to contact us directly (report-sg@ofo.so) so that we may continue to coordinate with law enforcement officials."

oBike said that it condemned the actions of the rider.

"We condemn this senseless act and will not hesitate to take legal action against members of the public who abuse our bicycles. We are in the process of lodging a police report regarding this matter" said Mr Elgin Ee, general manager of oBike.

A spokesman for Go-Ahead Singapore on Monday (June 19) said it is aware of the incident that happened at Punggol Temporary Bus Interchange.

"A police report has been lodged and investigations are currently ongoing," she said. 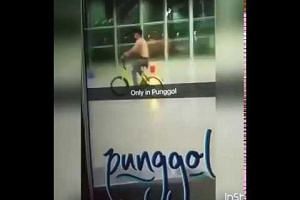 Man throws ofo bike into canal: 5 other cases of misuse of shared bicycles

A 14-year-old boy was arrested for committing a rash act in the earlier incident where a bike was thrown off Block 116B, Jalan Tenteram.

These are the latest incidents in a spate of incidents involving the abuse of shared bicycles.

Bicycles from three bike sharing companies - ofo, obike and Mobike - have been found in canals, repainted or damaged and discarded.

ofo added that it will continue to help authorities regulate the bike-sharing industry.

Some initiatives include increasing the number of designated parking spots, educating the community on responsible biking practices, and encouraging the community to report these incidents on their Facebook page and app.

"Additionally, we are constantly looking at other ways to do so, including improving the bike technology to better, and more effectively, identify and minimise these situations," the spokesman said.