SINGAPORE - A man returning to his vehicle along Desker Road on Thursday (June 1) morning was shocked to discover that a snake was coiled under its frame.

Videos and photos of a man and woman extracting the reptile, about a metre long, from the car's frame was first posted on citizen journalism site Stomp.

Eyewitness Goh Kian Sin, who works at an automobile parts store nearby, told The Straits Times that the driver, who was in his 20s, was scared when he realised there was a snake under his car.

"My neighbour said a foreign worker saw the snake come out from the drain at about 2am as there was heavy rain and the drain was flooded," said Mr Goh. "The foreign worker waited for the driver to come. He came at about 6am and the worker told him the snake was underneath his car."

The driver then made a call and a man and woman came to help, said the 52-year-old. A group of more than 10 people gathered to watch as the rescuers pulled the reptile out from above one of the vehicle's wheels.

Asked if he was scared, Mr Goh said he was not as he stood some distance away, but the snake kept opening its mouth, though the animal worker held fast to the snake's head. 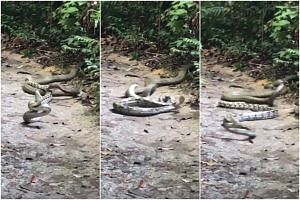 He said Acres has rescued a few snakes that entered vehicles, but it's "pretty rare overall".

"The python most probably entered the vehicle from the bottom of the car," said Mr Kalai. "This can happen when they feel threatened, as snakes are shy animals. It is a good hiding spot for them. Also, snakes being cold-blooded may seek warm places to rest and spaces in vehicles like the engine bay may offer such a nice conducive warm place."

If anyone comes across a snake stuck in a car, Mr Kalai advises the following:

3. Keep an eye on the snake to monitor its movement.

4. Wait for Acres' advice or arrival.