SINGAPORE - A man was found motionless on the road at Geylang Lorong 23 on Saturday (July 9) morning.

The 52-year-old man was pronounced dead by paramedics at 8.11am, police said.

The Straits Times understands that the deceased was lying in a pool of blood near a coffeeshop in the area.

He had a deep cut from the left side of his ear to the top of his head, and a wooden stick was found beside him. A bloodied knife was also found at the crime scene, Lianhe Wanbao said.

Man found dead on the road at Geylang Lorong 23

The victim was a helper at the zi char stall of the coffeeshop where his body was found, Shin Min Daily News reported. 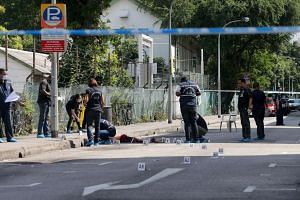 He stopped working there a few months ago but came to the coffeeshop every day to while his time away, said a former colleague.

Ah Hong, who works at the drinks stall, told Shin Min that she saw the deceased in the morning. His head was already bleeding as he tucked into some kway chap, he said.

When he was leaving, the suspect attacked him then ran towards Geylang Lorong 21, she said. She recognised the suspect as he frequents the coffeeshop, she said.

Taxi driver Mr Teo, who was having breakfast at the coffeeshop when the incident happened, said the victim was weak but still alive when he saw him. He called for an ambulance, he said.

The deceased was said to be clutching his wallet and his mobile phone, which had been damaged.

Police are investigating the unnatural death.

Police urged anyone with information about the case to call the police hotline at 1800-255 0000 or submit information online at www.police.gov.sg/iwitness.

All information will be kept strictly confidential, police said.