SINGAPORE - A man who was filmed in a now-viral video blocking a taxi driver's way and telling him that he "cannot do big things" as he is a taxi driver has been identified as the owner of a chicken rice stall.

The man appears drunk in the 2min 4sec video and is shown blocking the taxi driver from closing his door.

"Look I have so much money, I can't control myself," he says in Mandarin, and begins counting money - including $1,000 dollar notes - in front of him.

He is then shown lunging at the taxi driver and trying to grab his phone, before laughing.

Netizens identified the man as the boss of The Yang's Traditional Hainanese Chicken Rice at Serangoon Road, Mr Gary Lim.

Mr Lim, 37, told Shin Min Daily News in a report on Saturday (April 29) that he was deeply sorry for the incident.

"I drank too much that day, and cannot remember clearly what happened," he said. "I actually take taxis very often, and often talk to taxi drivers and get along with them very well, I really didn't mean to offend the profession."

The taxi driver involved in the incident, who gave his name as Mr Sun, told Shin Min that it happened at 2.51am on Thursday (April 27).

He had picked Mr Lim up from a taxi stand at Clarke Quay, and was dropping him off at Potong Pasir when Mr Lim tried to pay for his $12.45 taxi fare with a $1,000 dollar note, he said.

"There was no way I could give him change for that," said Mr Sun. He said Mr Lim then retrieved two $10 notes from his wallet and tossed them at him.

Mr Sun, 33, said he later made a police report as he did not want to be implicated.

Mr Lim explained to Shin Min that he carried such a large sum of money with him as he had meant to pass it to his suppliers.

"During that time, the money was in my pocket, so I took it out and 'haolian' (show off)," he said. 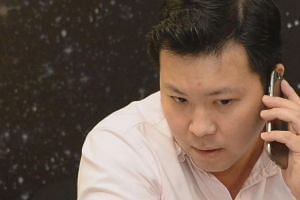 Mr Lim's restaurant has taken a hit from the incident, with many netizens leaving unhappy comments on its Facebook page and restaurant review pages, such as HungryGoWhere.com.

When Shin Min visited the restaurant, its manager Mr Chen told Shin Min that he made a police report as well, as the restaurant had allegedly been harassed by numerous phone calls and he was worried that the restaurant was under threat.

ST has contacted the police for more information.