SINGAPORE - A man died after he was run over by a train on the Bukit Panjang LRT early Friday (March 24) morning.

A body was spotted on the tracks at Fajar LRT Station after the last train in service left the platform at about 1am, SMRT, which operates the LRT, said.

"The police and SCDF were immediately alerted and arrived on site shortly after. We are extending our full cooperation to the police in carrying out their investigations,” said Ms Margaret Teo, SMRT's head of corporate marketing and communications.

The Singapore Civil Defence Force (SCDF) said it received a call for assistance at 1.05am and sent one fire engine and one ambulance.

"A male Chinese was pronounced dead at the scene by paramedics," SCDF said.

Commuters in an LRT train at Fajar LRT station 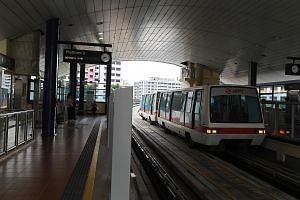 Police said it was informed that a man was run over by an LRT train at Fajar station after he had fallen onto the tracks at about 1am.

ST understands the man, who was in his 40s, was found without any identification.

While many residents said they did not notice anything unusual last night, some heard noises from the station.

"I heard a scratching noise and a boom around 1am, but I thought it was just workers working," said domestic helper Ms Asrotulida, who goes by one name.

"I didn't look to see what happened, and went back to sleep as it was late," said the 30-year-old, who lives near the station. "Sometimes, there is noise due to the works downstairs."

Ms Fiona Neo, 25, who is unemployed, said: "I came home around 1.45am, and saw an ambulance, fire engine and about six police cars parked at Fajar station. But there was no one around."

One commuter said the first train was slightly delayed.

"Around 4.40am, I went out to take the LRT to Pending station as usual. It generally comes around 4.55am but service seemed to be delayed today," said nearby resident Mr Tay Seow Song, 65, who had been heading out to work as a bus driver on Friday morning.

When ST visited Fajar station on Friday morning, services appeared to be operating as normal.

This is not the first fatality on the LRT line, which opened in 1999.

In 2000, Mr See Chau Lai, a hawker assistant, died after he was hit by a train near Jelapang Station of the same LRT line. A coroner's inquiry found that he walked along the tracks after having too much to drink.

That was the first fatality since the Bukit Panjang LRT started operations.

In 2010, a LRT technician died of injuries sustained after being hit by a train at Phoenix Station. Mr Chia Teck Heng was checking the power rail between Phoenix and Bukit Panjang stations.

Last month, SMRT Trains was fined a record $400,000 for a fatal accident on March 22 last year, when two trainees were hit by a train shortly after they stepped onto the tracks.