SINGAPORE - Anticimex, the pest control firm whose staff were seen capturing a 3m-long python outside Tang Plaza on Tuesday (Jan 29), has come forward to thank the public for the concern and support shown to one of its employees who was injured in the incident.

On Thursday, it put up a Facebook post, attributed to Anticimex's Asian division's managing director and president Tony Hurst, saying that the injured man had to undergo minor surgery to remove an embedded snake tooth, and is recovering.

Mr Hurst also explained that Tuesday's situation was "highly volatile and unpredictable" and required the staff to react quickly.

Experts The Straits Times spoke to had earlier criticised the manner in which the snake was handled, calling it "terrible" and "abusive, untrained and uncaring".

Mr Hurst wrote: "When the snake attempted to evade containment, not restraining the reptile by any means available could have had disastrous consequences in this busy and populated area."

He added that protecting the human public would always be the most important consideration of the company.

Commenting on the actions of a staff member who stepped on the python, Mr Hurst said: "A foot is no different to a hand being used in an attempt to restrain a powerful animal, and in fact, the human leg is stronger than the arm for this purpose."

In his post, Mr Hurst also said the manager of the team that tackled the python was trained in snake handling at the Singapore Zoo.

He thanked the staff for their actions in the "difficult setting" that day and emphasised that even after a staff member was bitten, the team did not display any "malice or cruelty" towards the snake, and made efforts only to prevent harm and contain it.

He said that Anticimex works closely with the authorities in order to ensure a safe living environment for all, and advised members of the public who encounter snakes to contact the Agri-Food and Veterinary Authority (AVA) for assistance. 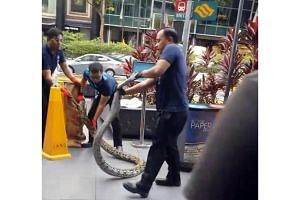 Veteran wildlife expert Subaraj Rajathurai, who has more than 25 years of field experience and is the founder of a wildlife consultancy company, however, said: "From the video, you can see the men did not respect the snake. They were just trying to assert their superiority over it, that's why a man got bitten - if you have a snake hook, as they did, and are trained, no one should get bitten."

Pointing out that those in the zoo or the Animal Concerns Research and Education Society (Acres) have never resorted to using their feet to capture a snake, Mr Subaraj said the Anticimex staff displayed a lack of training and knowledge.

Responding to Anticimex's post, Acres deputy chief executive Kalai Vanan said: "If handled properly, there would not be a need to use excessive force or step on the animal, and the animal handler would also not get injured."

The AVA confirmed on Thursday that it had received feedback that the python was mishandled, and is investigating this.