President must be able to command the respect of all S'poreans, he says

While it is nice and timely for Singapore to have a Malay president, the Malay candidate must meet the same exacting standards demanded of candidates from other communities, Minister-in-charge of Muslim Affairs Yaacob Ibrahim said.

"We do not want, and we cannot accept, tokenism," Dr Yaacob told the House yesterday, on the first day of debate on proposed changes to the elected presidency. "We want a president to command the respect of all Singaporeans," he added.

Speaking in English and Malay, Dr Yaacob, who is Communications and Information Minister, sought to explain the psyche and concerns of the Malay community and its historical burden of being perceived as lagging behind other communities.

Describing the issue as an "emotive one", Dr Yaacob noted that Singapore has not had a Malay president for 46 years. The last Malay president was Singapore's first president Yusof Ishak, who died in office on Nov 23, 1970.

"An entire generation of Malays have grown up without ever having a Malay president," said Dr Yaacob. "Among the older Malays, having lived under a Malay president, it is understandable that they yearn for one after a very long time." 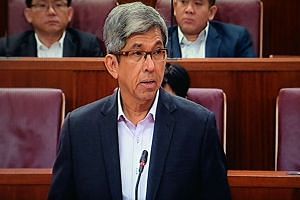 Younger Malays who grew up under meritocracy may be a little reluctant to see the change to ensure a Malay president from time to time, yet in closed-door discussions many would raise their hands when asked if they want to see a Malay president, he noted, adding: "But very few would say this publicly."

He noted how when the ethnic integration policy for public housing was started in 1989, there was some unease, but today, it has served the national interest, preventing ghettoes and enabling integration.

He himself struggled with it, but recognised the need for such policies "to avoid the pitfalls of other societies that ignored the human tendency to behave in tribal ways".

The changes to the presidency are a similar policy tweak, he noted.

"To have a qualified Malay to do the job speaks to a long-held desire among the community to see one of us serving in the highest office in the land. It is about our place in this nation that we call home," he said.

Malays, more so than other communities, look forward to seeing the success of one of their own, Dr Yaacob said. He cited the example of Natasha Nabila who topped the Primary School Leaving Examination in 2007 and broke the record for the highest scores. "The community was overjoyed," he said.

Dr Yaacob also shared a personal anecdote about his eldest brother Mohd Ismail Ibrahim, the first Malay President's Scholar. The extended family turned up at Paya Lebar Airport in 1968 to see his brother off for his studies, while a fellow scholar was accompanied only by his immediate family. He said: "The airport was swamped by Malays! It was a moment of celebration."

"The truth is that we do not have many Malays in key positions of power and leadership," noted Dr Yaacob. "Having one being a president is not just nice, but timely."

He added: "But this cannot, and must not, be the reason why we should have a Malay president."

Dr Yaacob also said he was concerned the debate was putting minority communities in the spotlight again, a situation the Malay community had frequently been in for the last 50 years. "We lagged behind in education, (had) higher divorce rates, higher crime rates and, more recently, Islam has been associated with the terrorism threat," he said.

The move to ensure a Malay president could be seen as "the Government going out of its way to help a community that has lagged behind". This is why for a candidate to be respected by all Singaporeans, he must meet the same high standards, regardless of race, he added.