A programme to assess and certify a foreign maid's household skills is being piloted by the Centre for Domestic Employees (CDE) in a bid to address the different work expectations of the workers and their employers.

The organisation, an NTUC initiative which looks after the needs of maids here, found in a 2017 survey that many employers felt that their workers were not adequately trained, despite the workers' claims that they have undergone training.

"It's actually a perception mismatch. Every home is different - you may be a bit more lenient, but I may not; you might have standards that are higher and so on and so forth," said Mr Shamsul.

CDE's survey found that only about half (54 per cent) of the 1,004 employers surveyed felt that their maids were adequately trained.

In contrast, nearly all of the 1,012 workers surveyed claimed to have undergone training.

"Our larger picture is to assure Singaporean employers that those with (the certification) have got the skill sets, and you know that they are quality (workers)," said Mr Shamsul, adding that CDE is working with employment agencies to assess newly recruited maids.

It was developed by the organisation together with NTUC LearningHub.

Since October last year, about 30 workers have undergone the assessment, which tests their skill in performing household chores such as cleaning, ironing and cooking.

The workers pay $50 for the assessment and they receive a certificate on completion.

The programme has been welcomed by employers such as Madam Esther Chan.

The 72-year-old retired administrative assistant said she has had to coach many of the maids she hired.

She added: "Its definitely better to have this assessment. Someone must step in to check them." 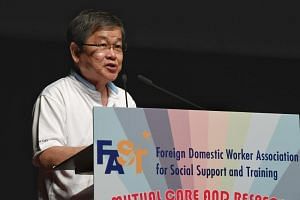 Last year, it handled 1,358 cases, of which about half involved maids who needed advice on employment issues or who needed intervention from the authorities.

It also sheltered 373 workers in distress last year, more than twice the number in 2017 .

This increase is attributed to more maids being aware of the organisation's existence and the help that it offers, said Mr Shamsul.