An Indonesian domestic worker told a district court yesterday that she suffered various abuses allegedly at the hands of her female employer, who is accused of using an array of weapons to injure her.

Ms Khanifah, 35, was allegedly hit with a hammer, bamboo pole and pounder that knocked out or broke her teeth, leaving her with head wounds that are still visible.

The employer, Zariah Mohd Ali, 54, is being tried on 12 of 28 maid abuse charges. Zariah's husband, Mohamad Dahlan, 56, is also accused of hitting Ms Khanifah with the cover of a frying pan.

The alleged offences occurred at the couple's home in Woodlands Street 31 between June and December 2012, after Ms Khanifah had been working for them for about six months.

Ms Khanifah, who is married with two children, told the court Zariah hit her on the head using the blunt side of a hammer on at least five occasions and twice on the mouth.

Once it happened after Zariah had scolded and accused her of not cleaning the toilet properly or fast enough. "I shouted: 'Ma'am, sakit (Malay for pain)', and I was bleeding," she said in Bahasa Indonesia through an interpreter.

When a small towel was not enough to staunch the flow of blood, Zariah gave her a sanitary pad to wrap around her head.

Recounting a final incident, she said she was cleaning the toilet when Zariah hit her again with the hammer. This time, she bled more as her previous wound had not healed, but Zariah's only reaction was to throw a sanitary pad at her, said Ms Khanifah, who removed her tudung in court to show that the injury was still visible.

Ms Khanifah said Zariah also hit her on the mouth with the hammer at least twice after complaining about her house work.

The first time she was struck, her gums bled, two of her lower teeth became shaky and her lip swelled, she said. The second time knocked out the two bottom teeth and broke several of her top teeth, she added.

"It was very painful," she said.

In addition, she said, Zariah had used a bamboo pole to hit her on the left side of her head so hard that the pole broke the second time. 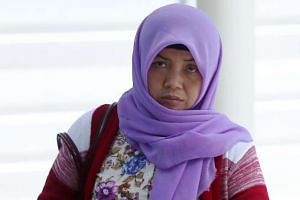 Ms Khanifah said Zariah also used a stone pounder to strike her on the forehead on at least five occasions.

At that point she broke down, so the court adjourned for a moment to let her compose herself.

Ms Khanifah then continued to list the alleged abuses. She testified that Zariah once stabbed her shoulders with a pair of scissors, leaving her with permanent scars.

Zariah also allegedly slashed Ms Khanifah's left forearm with a chopper after accusing her of not cleaning fish properly. In addition, she said Zariah once pulled her left little finger back until it broke.