SINGAPORE - Workers' Party chief Low Thia Khiang's announcement on Friday (Nov 3) night that he would be stepping down from the post next year took many political observers by surprise.

But they saw his move as a vote of confidence in the opposition party's younger leaders, and a solid commitment to leadership renewal within the party.

Observers also said the leadership change may spell the beginning of a new phase for the WP.

Institute of Policy Studies deputy director Gillian Koh, who did not see the move coming, said: "Mr Low is only 61 and seems like he still has a lot of fight in him."

This may indicate a need to clear the way for younger members of the party to take over its reins, she added.

One question that has come up is whether they are ready.

Said political observer Eugene Tan, referring to members of Mr Low's Aljunied GRC team: "It remains to be seen if Ms Sylvia Lim, Mr Pritam Singh, or Mr Chen Show Mao are able to take over and hold the party's loyalty and banner in the same way Mr Low did.

"But Mr Low is signalling that he is confident his successors are equal to the task and that the party is in good shape," added the Singapore Management University law don.

The political veteran's bowing out may also pave the way for a newer, more combative WP.

Mr Low had recently said that the WP is a step closer to being able to form an alternative government, in an interview published in the party's commemorative book Walking With Singapore.

"This announcement is aligned with the party moving into a new phase," said Associate Professor Tan.

Some have said the WP's style of politics may be in need of renewal too. 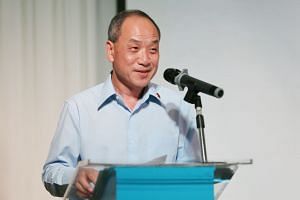 Said political watcher Derek da Cunha: "It is no secret that there has been a clamour by one section of the WP rank-and-file, and quite a number of the parties' ardent supporters, for a more robust opposition to the People's Action Party.

"As head of the WP, Mr Low has generally been relatively taciturn, which has not necessarily been a bad thing especially after the disastrous state of opposition politics following the 1997 general election. But that approach, together with running a tight ship, is slowly being overtaken by other developments."

Dr da Cunha added: "It could give the WP a boost at a time when the party is embroiled in the Aljunied-Hougang Town Council (AHTC) saga."

But questions also remain over the AHTC lawsuit, which was brought in July by the town council - under the direction of an independent panel - against senior town councillors including Mr Low.

AHTC wants them to account for more than $33 million in payments made to its former managing agent and service provider.

Dr Koh asked: "Is Mr Low going to be found responsible for what happened? Or is he standing down as Sec-Gen of WP because of this?"

"One reason he may be standing down could be to convince voters to that he will take full responsibility for the AHTC troubles," she said.

Associate Professor Tan also said Mr Low's move might pre-empt a scenario where the lawsuit results in him being ineligible to contest in a parliamentary election.

On Friday night, party members and volunteers paid tribute to their outgoing chief, telling The Straits Times that Mr Low's biggest contribution was building up the WP into an organisation that had a new generation of leaders to take it forward.

Said former WP NCMP Yee Jenn Jong: "This has been something he has been preparing the party for for some time. He is conscious of his role in building the party up as an organisation, rather than something centered around a single person."

An 80-year-old WP member, who wanted to be known only as Mr Lim, said that Mr Low built up the party singlehandedly.

"If he didn't build up the party, how would we win Aljunied GRC. We do not have a pool of younger leaders,"said the retiree.

"Maybe he can play a more supporting role now as an advisor, he can help the younger leaders because of his experience," he said.

WP volunteer Jeff Ng, 24, felt a change of leadership would inject fresh ideas into the party.

"I think this is a good thing that will help take the party forward."