SINGAPORE - One of the domitory common rooms in Nanyang Technological University (NTU) received a rare visitor on Tuesday (Nov 22) morning.

A young pangolin got lost in a common room at Hall of Residence 7. It was later rescued and sent back to the wild that day.

The wild mammal was huddled against the wall of the room when rescuers from the Animal Concerns Research and Education Society (Acres) turned up slightly before 10am.

There were two holes in the door, and the pangolin probably used one of them to enter, and made it larger, Acres wildlife group director Kalai Balakrishnan told The Straits Times.

The pangolin likely got lost in the "urban jungle" wandering through drains or after crossing a road, he said in a Facebook 'live' video, which was posted on Tuesday.

It's not clear if the pangolin was a male or female, but it was not quite adult-size, Mr Kalai said.

Shortly after the rescue, he released the animal in a nearby forest about 30m away from where it was found.

He chose a spot about 20m into the forest, which had a number of fallen tree trunks.

As the pangolin was released, Mr Kalai said: "A lot of fallen tree trunks and rotting logs, this is the sort of habitat they will like, there will be termites here, ants for him."

After setting the cage down, Mr Kalai gently turned the pangolin to face the open cage door.

The nocturnal animal sniffed at the opening before venturing out and walking into the forest.

While this pangolin was not in danger, it needed help getting back home.

"Most of the times in Singapore, wild animals get lost in our urban jungle and just need a bit of help to get relocated back safely into a natural habitat," Mr Kalai said. 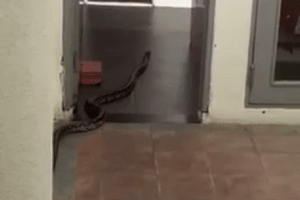 This is the second pangolin rescue Acres has conducted in NTU this year.

While pangolins are safe from poaching in Singapore, it is endangered in many other places due to wildlife trafficking.

The National Parks Board (NParks) estimates that there are more than 100 wild pangolins here.

Last month, a python was found in NTU's Hall 15. The snake was captured and taken away by a pest control service.

Call the Acres wildlife rescue hotline at 9783 7782 if you spot wild animals in a tight spot.