SINGAPORE - Foldable chairs, stools, picnic mats and lots of electronic gadgets were just some of the items the roughly 1,000 shoppers outside Robinsons at The Heeren had armed themselves with to survive the queue for the retail giant's annual Black Friday sale.

Mr Marcus Leong, who beat the crowd to be first in the queue on Thursday (Nov 22), lounged on a foldable chair with a drink holder and had with him newspapers and a Samsung tablet.

The 33-year-old engineer took turns with his wife to keep their spot in the queue: "My wife and I reached here at around 6am, I kept her company till about 8am then went off to work. I came back at 2pm and she went home for a while."

Mr Leong and his wife, who have a 10-month-old son, placed a $200 deposit a few weeks ago to secure a mattress and bed frame that they would pay for once Robinsons opens its door for the sale at midnight on Friday morning. He plans to spend around $6,000.

They are also eyeing a Dyson air purifier, pots, pans and bedding for their brand new build-to-order flat, which they will move into next month.

In his words, this is Mr Leong's first time "doing something crazy" for Black Friday.

"It just happened that the sale was in time for our home so we wanted to try it out," he said.

Black Friday, an American shopping holiday that traditionally takes place on the Friday after Thanksgiving, is a golden opportunity to attract shoppers for brick-and-mortar retailers such as Robinsons.

Other retailers such as Metro, Courts, Tangs and Sephora also have their own Black Friday sales.

But Robinsons is ramping up this year, starting its in-store sale early, at midnight, across all its three stores and will stay open for 24 hours on Friday. 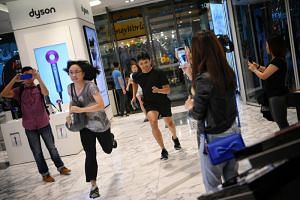 The giveaway items are the big attraction at Robinsons: Free iPhones and iPads will be given to shoppers who hit varying degrees of minimum spending while stocks last.

"My husband and I need a new bed and mattress so we thought we might as well get the iPhone too."

Mrs Lee, who works in the finance industry, took one day of leave for the annual shopping event.

Mr Frederick Yong, 57, a retiree, brought his extended family for the event. The six members of the Yong family came to Robinsons at around 5pm in the afternoon.

They estimate that they will spend about $20,000 in total - for two brand new beds and mattresses. Cosmetics, perfumes, shoes and kitchenware are also on their hit list.

"We will pay for our mattresses first and look around after our first round of shopping."

After doors opened on Friday at midnight, the iPhone XS Max was redeemed fully in slightly over 30 minutes. The phone is a gift with minimum purchase of $8,000.

Mr Jeffrey Ang who works in the banking industry managed to snag two mattresses, a bed frame and got the iPhone XR as a gift, said: “It was actually the salespeople who informed us of the Black Friday sales. My wife and I were planning to buy mattresses and the salespeople told us that if we didn’t mind waiting till Black Friday, there are good sales.”

The 36-year-old, who saved over $3,000, said: “I think they managed to keep the details of the sales under wraps and created a hype around it.”

Ms Charmaine Tan, 19, a university student came with her mother and began queuing at about 11am in the morning

They were among the first 30 in the queue. They bought three mattresses and four Dyson fans, hitting the $8,000 minimum spending that allowed them to redeem an iPhone XS.

Ms Tan said: “I like that sales are 24 hours this year, it gives shoppers time to browse. Security was also very good for the queues and overall I thought the sale was well-organised.”