SINGAPORE - The annual Toto Hongbao Draw - with a top prize of $12 million up for grabs - drew long queues at several Singapore Pools outlets on Thursday (March 1).

Punters turned up at different outlets across Singapore in hopes of striking it rich on Friday, which is Chap Goh Mei, the 15th and last day of the Chinese New Year.

Standing in line at an outlet in Commonwealth, Ms Hazel Kang, 22, said she first bought tickets for the hongbao draw three years ago.

"I ended up winning $10, so I've been buying tickets for the hongbao draw every year since," she added.

A customer who does not buy Toto regularly decided to join the queue after hearing about the draw.

"Someone mentioned it so I thought I'd just try my luck. After all, it's only $10," said the 56-year-old, who gave his surname as Chua. 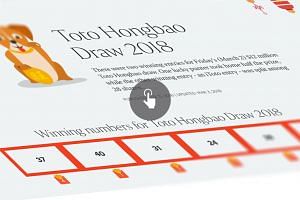 At a Clementi outlet, a punter said he has bought tickets since the hongbao draw started in 2000.

"But I buy only during the big draws, for the fun of it," said the 69-year-old, who did not want to give his name. "One or two million, buy for what?"

The hongbao draw will take place on Friday at 9.30pm at the Singapore Pools Building.