SINGAPORE - As efforts ramp up to commemorate the 200th anniversary of the arrival of Sir Stamford Raffles in Singapore, the office in charge of next year’s activities has launched the bicentennial logo.

It signifies the evolution of Singapore not only in the last 200 years, but 700 years.

The logo comprises seven red poly-shapes, each representing one century. They form a circle to symbolise the island’s transformation through time, adapting and evolving to become present-day Singapore, said the Singapore Bicentennial Office in a media statement.

It said the logo was designed to express both change and continuity, “conveying the sense that this is an ever-evolving journey for the better”.

“The commemoration is an occasion for us to reflect on our history before and after Raffles, and how we’ve evolved from a place with a geographically strategic location to a people with a unique Singaporean DNA.

“Throughout the year, we will look at the impact powers around the region and the world have had on us; the huge cast of characters who’ve contributed to our evolution, and more,” said the office.

The commemoration will be marked by a year-long calendar of events in 2019, culminating in a major exhibition at the Fort Canning Centre. Anchor events will not only look at Singapore’s history after the arrival of Stamford Raffles in 1819, but also the 500 years prior to that. 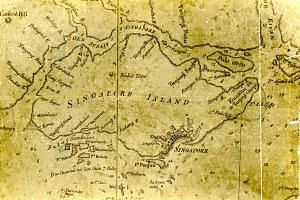 Singapore's 'tricky' place in archipelagic history: To understand Singapore's history, look at it from the sea, not land

700 years of history, a bicentennial and four cycles of settlement

NDP will return to the Padang in 2019 as Singapore commemorates bicentennial: Ng Eng Hen

Plans to mark 200th anniversary of the founding of modern Singapore in 2019: PM Lee

This could help to raise awareness among Singaporeans that the 500-year period between the 1300s and 1819 was not bereft of activities.

For instance, in the 1330s, Chinese trader Wang Dayuan who had visited Singapore noted that the island had foreign traders living alongside the local populace. He also described two local settlements – Banzu and Long Ya Men.

The dominant group living in Singapore during the 1400s was the Orang Laut, described as expert fishermen and fierce warriors.

In the 1500s, Singapore’s port impressed gem trader Jacques de Coutre, who described it as one of the best in the East Indies.

Mr Lim Chen Sian, an associate fellow at the archaeology unit of ISEAS - Yusof Ishak Institute’s Nalanda-Sriwijaya Centre, said looking back at 700 years can benefit the people of Singapore as it provides a “sense of depth and time”.

Mr Lim, who is also on the advisory panel for the bicentennial, said it will be an opportunity to explore what happened to Singapore’s port and settlements over the centuries - in particular why it succeeded and failed at different junctures of history before it was revived by the British East India Company.

He added: “The study of the past can help us chart our future, where we want to be or where we don’t, based on what worked or did not work in the past. Port cities have flashes of brilliance and then disappear as another port can rise and take prominence anytime.”

Historian Peter Borschberg of the National University of Singapore (NUS) noted that Singapore’s early history has been acknowledged for some time at the official level, and has been taught in higher education institutions such as NUS.

The book, Singapore: A 700-Year History, by historians Chong Guan Kwa, Tan Tai Yong and Derek Heng, was based on a Singapore history module taught at NUS, he added.

Dr Borschberg said that what is new or at least unfamiliar to many Singaporeans is the way this history is being framed and some of the events or landmarks in Singapore’s pre-1800 history.

He said: “One of the accomplishments of the bicentennial commemorations next year will be to relativise the founding of the British trading post in 1819 within the context of Singapore’s history across the longue durée (long duration).”

The SG50 logo was a little red dot which was designed to symbolise Singapore’s ability to punch above its weight despite its limitations in size and natural resources.