SINGAPORE - For Instagram star Jocelyn Teo, big is not necessarily better. In fact, tiny things are what she specialises in.

She creates adorable miniature food items with clay and sells the sought-after trinkets online to both local and overseas customers.

Her hobby, picked up when she was an undergraduate in 2009, turned into a business when people offered to buy the miniature food sculptures that she made.

Her tiny local delights like kueh dadar and ang ku kueh look just like the real deal, complete with texture and vivid colours.

More than 75,000 people follow her on Instagram, where she puts up photos of her work - ranging from Singapore goodies such as nostalgic multi-coloured wafers, kueh tutu and Singapore-style ice cream sandwiches, to more ubiquitous items such as macarons and McDonald's burgers.

She told The Straits Times in a video interview that she draws inspiration from "everywhere", as "food is everywhere in Singapore".

"I can go out for lunch and I'll come back thinking - Oh I should do that, whatever I had just now," she said.

Ms Teo, who mostly makes local desserts, started out creating the items as favours for friends around the time she graduated from the National University of Singapore with a degree in communications and new media in 2009.

She then worked as a promotions scheduling executive with a sports broadcasting company for a year while managing Aiclay part-time, but she previously told ST in a 2014 report that she realised her passion was with Aiclay. 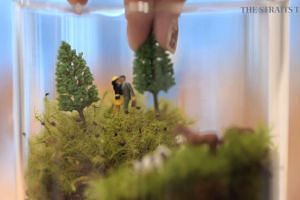 The Mini Series: Recreating memories in a miniature moss garden

"The nine-to-five job became increasingly dreary and I found little meaning in it. I decided to focus on Aiclay as something I love doing and work for myself," she said.

She told ST in the recent video interview that her main challenge was her own mindset.

"I do not have so much discipline, especially at the very start," she said. "I had to tell myself this is not a hobby any more but something I'm doing full-time."