Two drone incidents in a week that have disrupted flights at Changi Airport have baffled observers, who believe it is likely not the work of local hobbyists or commercial groups.

Drone enthusiasts and experts here said both groups are aware of and abide by existing drone regulations, and would not think of flying drones in a clear no-fly zone such as Changi.

A combination of unauthorised drones and bad weather had delayed some 15 flight departures and three arrivals, while another seven flights were diverted on Monday.

Mr Eddie Chan, 51, who runs Hobby Square, a store selling remote-controlled vehicles in Sim Lim Square, told The Straits Times it was highly unlikely for someone from the local drone community to be flouting the rules. He said they would know Changi Airport was a no-fly zone, adding: "The community is very close-knit and we often share the rules and regulations with one another, especially to new members of the community.

"I myself educate customers buying drones from me (on the regulations) because I feel that it is my responsibility to do so."

He said: "It is hard to imagine someone from the community knowingly going to Changi. For someone to do that, I would think he is either very new to flying drones or a foreigner who is not aware of the regulations."

Mr Mark Yong, chief executive of drone flight management software firm Garuda Robotics, said the culprit is not likely to be a commercial entity here either.

"Commercial players here like us work closely with the authorities. We know that aviation safety is the No. 1 priority and would not just flout the rules," he added.

Instead, a reasonable question to ask, given the closeness of the two incidents, is whether they could be part of a series of deliberate acts, said Mr Yong, although he declined to speculate further. 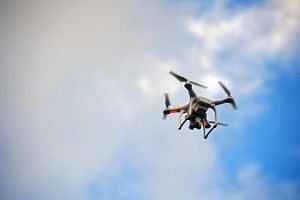 The Civil Aviation Authority of Singapore declined to comment as investigations are ongoing.

Unauthorised drones had also caused havoc at Changi Airport on June 18, delaying 37 flights and affecting the operations of one of the airport's two runways for up to 10 hours, until the morning of June 19.

There are also questions over why the culprit in either incident has yet to be apprehended, despite the Republic of Singapore Air Force having several weapons at its disposal, including a jammer gun, which emits signals that can jam the control signals of drones, as well as a drone catcher system, which uses a net to catch them.

"It is hard for conventional radar systems to pick up drones as they are small and fly at a comparatively lower speed than aircraft. I don't know what detection system is being used at Changi but, in these kinds of situations, the advantage is with the intruder," he said. "The perpetrator could be anywhere outside the fences. He can launch and operate a drone remotely from far beyond the line of sight of the facility."

Mr Wong declined to speculate on the model of drone that could have been used in Monday's incident. ST understands that the drones sighted were not of recreational make. Long-range commercial drones like the DJI Mavic 2 Zoom can stay airborne for up to 31 minutes and fly up to 8km away from their pilots under ideal conditions.

Moving forward, Garuda's Mr Yong said a nationwide drone monitoring network could be the answer to speedily identifying rogue drones and preventing further unauthorised incursions. "But we are still quite early in the game, and developing the technology will take time. We already have clear regulations, and the community is continuing to educate one another and the public on how to be responsible users."

Correction note: This article has been edited to update the distance that the DJI Mavic 2 Zoom can fly away from its pilot.