Ms Olivia Lee, 33, who shot to prominence after being named one of the eight most promising designers at the renowned Salone del Mobile Milano furniture exhibition in Italy in April last year, received the award from Mr Loh Yew Seng, chief executive officer of SPH Magazines, during a gala dinner at the Shangri-La Hotel.

President Halimah Yacob was the guest-of-honour at the event.

Ms Lee, who founded her own design company Olivia Lee, said she was humbled by the award, and was stunned when she received the news.

"I believe this is an important message for little girls everywhere - that hopes and dreams come in different sizes, and that all of them are attainable," she said of her win.

Businesswoman Jennie Chua, who headed the committee of seven judges to select the award recipients, said Ms Lee demonstrated her capability with her strong reputation overseas, having showcased her work in Milan, Berlin and Tokyo.

Ms Chua said: "Her knack of incorporating a sense of playful wonder into her work, as well as her ability to seamlessly combine form and function, is what makes her stand out. 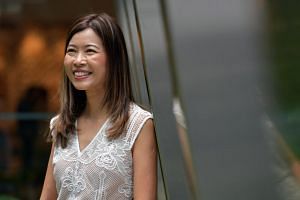 "Olivia is also blazing a trail for other young designers in Singapore."

Ms Lee made her name with The Athena Collection, a 10-piece furniture collection that she designed to update furniture for the quirky digital habits of a modern homeowner.

The collection won her the promising designer accolade last year by online architecture, interior and design magazine Dezeen, while online design and visual arts magazine Sight Unseen named the collection among the best showings at the 2017 Milan Furniture Fair.

For Ms Lee, the award comes as a welcome validation of her efforts, having worked to establish herself in the traditionally male-dominated industrial design industry. On rare occasions, she had been on the receiving end of sexist comments, which she tried to correct.

"Like many renowned and respected women in design, both in the past and present, we want our work to speak for itself, and we do not want it to be defined by our gender," said Ms Lee.

"But at the same time, we are women. And, that is something special we should never deny."