SINGAPORE - A suspected loan shark runner was arrested after allegedly setting fire to the door of a home in Sengkang.

The 26-year-old man was found to be in possession of several scheduled weapons including flick knives, knuckle dusters, a parang, a stun device and an extendable baton, the police said on Wednesday (May 23).

They had received a report at about 5.15am on Tuesday, saying that a main door of a residential unit in Sengkang West Way had been set on fire.

Officers from Ang Mo Kio Police Division and the Criminal Investigation Department identified the suspect and arrested him in a joint operation with Jurong Police Division within nine hours after the report was lodged.

The man will be charged in court for loan shark harassment and unlawful possession of scheduled weapons.

First-time offenders found guilty of loan shark harassment face a jail term of up to five years, mandatory caning of up to six strokes, and a fine between $5,000 and $50,000.

For the possession of scheduled weapons, he can be jailed for up to five years and at least six strokes of the cane. 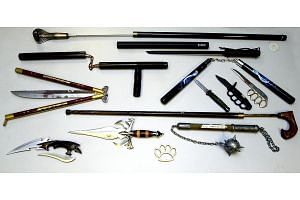 Man charged with having brass knuckles: Other scheduled and prohibited weapons in Singapore

"Those who commit such acts of harassment, causing damage and endangering lives of innocent victims will be arrested and dealt with severely in accordance with the law," said the police.