After a vicious attack with a samurai sword and a knife on a man at a Serangoon Road bus stop on Wednesday, seven alleged assailants fled in a rental car, prompting an islandwide manhunt.

They were rounded up early yesterday morning, and preliminary investigations revealed that the incident is believed to have arisen from a personal feud.

At 1pm yesterday, police inves-tigators were spotted escorting one of the seven to Lower Peirce Reservoir. The suspect - understood to be Arjun Retnavelu - was in restraints and accompanied by five officers.

Arjun claimed he had wrapped the sword in an orange cloth and dumped it in the reservoir at about 4pm on Wednesday, shortly after the slashing incident.

Two commercial divers from Asia Dive Academy were engaged to search for the sword, one of two weapons used in the attack which left a 27-year-old man, believed to be a Singaporean, lying in a pool of blood in front of the bus stop near 202 Serangoon Road on Wednesday. The second weapon - a kitchen knife - was left at the scene, near Broadway Hotel.

However, a four-hour search for the sword in the reservoir yesterday yielded nothing.

Divers Ryan Phoa, 29, and Jacki Ng, 42, entered the water at around 1.30pm, first establishing an area of search by setting a buoy before checking the underwater terrain.

But it was tough going. Mr Ng said they dived to a depth of about 3m but visibility was bad, only about 10cm, and it became worse when sediment at the bottom of the reservoir was disturbed, making the water even murkier.

Mr Ng added that there was a thick layer of silt at the bottom which the sword could have sunk into.

At about 3.30pm, police scanned closed-circuit television footage of the area for more clues but still had no luck.

The search for the weapon was called off at 5.45pm. 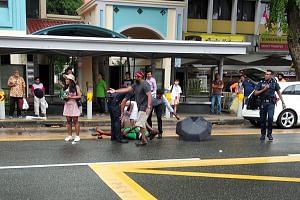 Arjun had been in trouble with the law before. He was sent to the Singapore Boys' Home in 2010 for theft. In 2011, the then 16-year-old was sent to the Reformative Training Centre for causing grievous hurt and working for an unlicensed moneylender.

The attack on Wednesday happened at 2.30pm and left the victim with serious injuries, including on the back of his head, arms and legs.

He was taken to Tan Tock Seng Hospital, where he is understood to be in a stable condition.

Within 18 hours of the attack, Arjun was arrested along with five other men at a unit at Block 26 Sin Ming Industrial Estate, while the seventh man was arrested in the vicinity of Corporation Road in Jurong. The suspects are all Singaporeans, aged between 17 and 28.

Police said they are being investigated for rioting while armed with dangerous weapons. If found guilty, they could be jailed for up to 10 years and caned.

Criminal Investigation Department director Florence Chua yesterday commended the officers, who solved the case within 18 hours. "Our officers displayed perseverance and tenacity in their investigation probes, coupled with extensive ground work, to successfully arrest all of the suspects."