SINGAPORE - Health authorities say there is no link between a patient who was seen at the Singapore General Hospital (SGH) for listeriosis and the consumption of contaminated rockmelons from Australia, according to preliminary investigations.

The Ministry of Health (MOH) told The Straits Times on Friday (March 9) there is still no report of anyone here having contracted the bacterial disease as a result of eating the rockmelons, which have made 17 people ill in Australia and killed four.

All rockmelons from Australia are in the process of being recalled by authorities.

The ministry said it was notified by SGH of a case of listeriosis on Tuesday (March 6). Further tests are ongoing to determine the source of infection.

A WhatsApp message circulated on Friday which claimed that someone who ate rockmelons from Sheng Siong has ended up as the "first case of listeria in SGH".

The outbreak in Australia is linked to contaminated rockmelons from a farm in New South Wales. Consignments of melons from the farm were found to have been exported to Singapore.

There is an incubation period of between three and 70 days after consuming listeria-contaminated food. Consumers should seek medical attention as early as possible if they develop fever and muscle aches that are preceded by diarrhoea or other gastrointestinal symptoms, appearing within 70 days of eating Australian rockmelon, the ministry said. 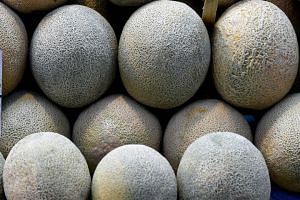 "We will continue to monitor the situation closely," said the MOH spokesman.

Listeria bacteria are found in the environment, such as soil, water, effluents and the faeces of humans and animals, and can contaminate food items such as raw or ready-to-eat foods and fresh produce. Individuals who eat the contaminated food may not develop any disease, and many of those who fall ill experience mild symptoms, the spokesman said.

But pregnant women, the elderly or individuals with a weakened immune system are at highest risk of serious disease, which could include brain and heart infections or complications in the foetuses of infected mothers.

It is treatable with antibiotics if diagnosed early, and cannot be spread from person to person.

The key to prevention of listeriosis lies in hand hygiene, safe handling, cooking and consumption of food, the MOH said. People can reduce the risk of listeriosis by:

· Avoiding raw (unpasteurised) milk or foods made from raw milk.

· Washing hands and kitchen utensils such as knives and cutting boards after handling raw food.

· Using separate sets of knives and cutting board for raw and cooked food.