SINGAPORE - For entrepreneur Delane Lim, 32, who watches speeches by former United States President Barack Obama regularly for inspiration, listening to Mr Obama speak in person this afternoon (March 19) was a big "wow" moment. "It's, like, 10 times better than seeing a Korean pop star," he quipped.

Trainee teacher Wong Zi Heng, 26, said he was inspired by Mr Obama's life and his achievements as the first African-American president of the US. Mr Wong, who is paralysed from his chest down, said: "The one thing I took away most was how he said we should have hope and how we should take action to make things happen. As a teacher in training, I believe I'm in a position where I can help students fulfil their potential."

The pair had been extended an invitation by Bank of Singapore's chief executive Bahren Shaari to hear Mr Obama speak at the Shangri-la Hotel Island Ballroom to 1,000 of the private bank's clients and guests from all around the world.

The Bank of Singapore, a subsidiary of OCBC Bank, has previously invited other luminaries, like Nobel Prize recipients and economists Paul Krugman and Joseph Stiglitz, to address its clients.

During the hour-long closed door session, Mr Obama, 56, spoke about his life journey, topics close to his heart like climate change and his vision for the next generation. It was moderated by former Nominated Member of Parliament and communications consultant Viswa Sadasivan.

Mr Bahren said he invited Mr Lim and Mr Wong as he was "very moved" after reading about how they had bounced back from major setbacks in The Straits Times' Generation Grit series. The series, on alternate Wednesdays, profiles millennials who have overcome or continue to deal with, major adversity in their lives.

In Singapore with young people who are advocating for education, empowering young women, and getting involved all over Southeast Asia with a profoundly optimistic commitment to building the world they want to see. https://t.co/so4Uqouu8M

"Everyone encounters obstacles and setbacks in life. It is how we pull ourselves up to overcome them that defines who we are. I hope this invitation to listen to former President Obama - who has inspired millions around the world with his optimism and never-say-die attitude - speak in person would be a boost to them and instil in them the belief that, yes, they can," Mr Bahren said, echoing Mr Obama's famous "yes, we can" rallying cry. 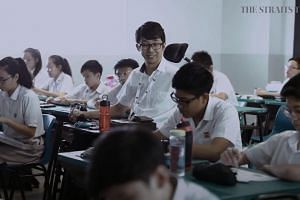 Generation Grit: Paralysed at 21, his will to live was unwavering 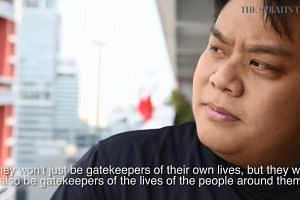 Generation Grit: Despite his own constant pain, he helps others overcome theirs

Mr Wong became paralysed at the age of 21 after a swimming accident during a university orientation camp. Despite his disability, he went on to complete a Physics degree at the National University of Singapore, for which he graduated as valedictorian, and is doing a postgraduate diploma in education at the National Institute of Education.

Mr Lim came close to suicide after a series of health, relationship and business blows, but recovered to start a charity that teaches students how to spot signs of depression in their peers and help them.

Mr Lim said Mr Obama challenged his audience to give - either their money, time and other resources - to better the lives of others. That challenge motivates him to do more to reach out to younger children, such as those under 12, who may be feeling depressed or even suicidal, he said.

He said: "People like Delane and Zi Heng are role models in their own right, their lives a living example of perseverance and celebration of the human spirit. Their positive approach to life in the face of obstacles is what the Generation Grit series is about."