The estate of the late Lim Kim San has sold a freehold good-class bungalow (GCB) in Dalvey Road for $93.9 million - or $1,804 per square foot based on the 52,059 sq ft land area. The elevated site is large enough to be redeveloped into three bungalows.

The buyer is understood to be a Singaporean member of the Tsai family of Taiwan. The family controls Homax Equity, a vehicle that its founder, billionaire Tsai Tseng-yu, has used to make real estate investments since he struck out on his own in 2010, after having sold his shares in Cathay Financial Holding to his brothers.

Mr Tsai's father, Mr Tsai Wan-lin, built Cathay Life Insurance - the predecessor of Cathay Financial - into a powerhouse, and was Taiwan's richest person at the time of his death in 2004, according to Forbes.

This would not be the family's first major acquisition in Singapore. In 2011, an entity connected to Homax bought Robinson Centre, a 20-storey office block in the Central Business District, for around $293 million.

The Dalvey Road property that the Tsai family member is now acquiring has on its site a two-storey bungalow built in 1967 by Mr Lim, who was the first Housing Board chairman and former executive chairman of Singapore Press Holdings.

Located near the Singapore Botanic Gardens, the house is now vacant; it was once reported to be the home of theatre director and film-maker Glen Goei. 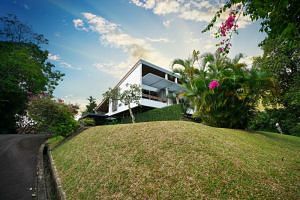 Lim Kim San's property up for sale: What you need to know about good class bungalows

Bungalow owned by Lim Kim San may go for over $100m

Jones Lang LaSalle marketed the property through a tender exercise that closed on Sept 12.

The Dalvey Road deal takes the tally to 13 transactions totalling about $354 million in GCB areas in the third quarter of this year - higher than the eight transactions adding up to $169.1 million the quarter before. In the year-ago quarter, there were seven deals amounting to $123.1 million.

The tally for the first nine months of this year is $773.1 million - and this excludes a string of deals in GCB areas that were completed this year without caveats being lodged by their respective buyers. Examples include properties along Nassim Road, Cluny Hill, East Sussex Lane and Lornie Road; their total transaction value was $109.3 million.

Bungalows in GCB areas are the most prestigious form of landed housing in Singapore, with strict planning conditions stipulated to safeguard their exclusivity and low-rise character. There are only about 2,500 bungalows in 39 GCB areas.