SINGAPORE - Singapore has developed its own variation of Chinese culture and an identity that resonates with Chinese Singaporeans as well as Singaporeans of other races, Prime Minister Lee Hsien Loong said on Thursday (Sept 6) night.

Speaking at a dinner to mark the 95th anniversary of the Lianhe Zaobao newspaper, he cited a series of stories published in The Straits Times and Zaobao in February this year that was based on an exchange of six letters between The Straits Times’ Yuen Sin and the Chinese daily’s Ng Wai Mun.

Both journalists, who are bilingual, had exchanged views on issues such as the Special Assistance Plan schools that offer more opportunities for enriched Chinese-language learning, and the Chinese Singaporean identity.

The duo reflected the younger generation’s views on Chinese Singaporean identity and culture, and it is different from that of the older generation, he said.

“They grew up in our multicultural society and understand our culture is unique, and not just a copy of another country’s culture and heritage,” he told the 500 guests at the gala event held at Shangri-La Hotel.

He noted that Zaobao’s NewsHub editor Han Yong May had said in a commentary on the feature by the two journalists that it would take at least three generations for a population’s collective identity to form.

PM Lee expressed the hope that Zaobao, with other Chinese groups, will create programmes that encourage people to preserve and promote Chinese culture. This will help strengthen “our national identity” and inspire the young to deepen the understanding of their own culture and pass it on to future generations, he said.

Mr Lee also acknowledged the efforts of Zaobao to transform itself in the face of technological disruption to the media industry, as well as its efforts to promote Chinese culture and language. He said the almost 100-year-old newspaper is doing well partly because it serves as a window to the Chinese culture and the world for Singapore’s younger generation. 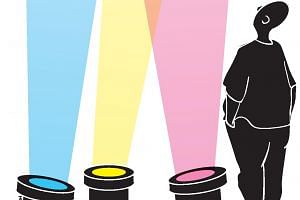 The Chinese Singaporean identity: A complex, ever changing relationship

Today, Zaobao is not just a staple for Chinese-educated elderly readers. “As the younger generations become more bilingual, you provide an alternative perspective from the English media,” he said.

In doing so, the paper gives them a more rounded perspective on the world and Singapore, he added.

“Singaporean readers find the views relatable, and foreign Chinese readers find them refreshing,” he said. “As international attention on China and the region grows, Zaobao has continued to provide an objective and credible perspective on developments in China and Asia.”

Zaobao, he added, has established considerable trust among its readers. He cited how its reporting perspective remains objective and balanced amid the tensions between China and the United States. In an April poll done by a China news agency and university, it ranked as the most influential Chinese new media outlet in the world.

He referred to a commentary by former Zaobao editor Lim Jim Koon that was published in the daily on Thursday (Sept 6). Mr Lim wrote that Zaobao needs to adapt to the times, but it must remain credible.

PM Lee said: “Actually, I hope all Singapore media, not just Zaobao, will retain their credibility and provide quality coverage for their readers. In this age where fake news is prevalent, this has become even more important.’’

Lianhe Zaobao traces its origins back to the Nanyang Siang Pau, which was started in 1923 by philanthropist Tan Kah Kee. Although the paper was first published in Singapore, it soon grew in popularity in Malaysia as well. By 1951, copies of each morning's paper were being delivered to Kuala Lumpur, Ipoh and Penang by private planes.

Nanyang Siang Pau was registered as a public company in 1975, and publicly listed in 1977. Six years later, the paper merged with another Chinese newspaper, called Sin Chew Jit Poh, and took on its current name.

Singapore Press Holdings chairman Lee Boon Yang, who also spoke on Thursday, said "the battle is not won" even after 95 years.

Apart from the disruptive forces that are shaking up the traditional media industry, he said Zaobao faces the unique challenge of drawing younger readers who are often less proficient in Chinese.

"In order to meet the changing reading habits and Chinese proficiency of our readers, our journalists and editors have also adopted a more direct and digestible style, to report news with more graphics and visual content to convey the message," he said.

But despite these challenges, the paper's readership grew to 471,000 last year. This represented a year-on-year growth of 5.4 per cent and was a "significant achievement", Dr Lee said.

The paper is the top Chinese-language newspaper, with a combined daily circulation of 197,500 copies in print and online since August 2017. It also has a combined daily readership of 14.7 per cent among Chinese Singaporeans.